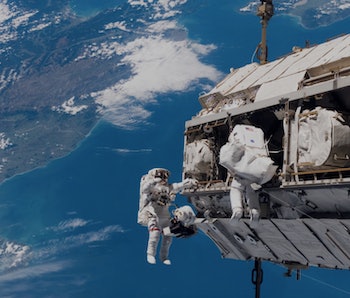 The cause might be taken up by foreign governments or private industry, but based on a House committee meeting on space, science, and technology back in late March, it’s clear that many in Congress are more interested in deep space exploration and the path to Mars than they are with continuing to fund the research being done on the ISS.

“Tax dollars spent on the ISS will not be spent on destinations beyond low Earth orbit, including the moon and Mars. What opportunities will we miss if we maintain this status quo?” Congressman Brian Babin, a Texas Republican and chair of the House Science and Technology’s Subcommittee on Space asked during the meeting. “The longer we operate the ISS, the longer it will take to get to Mars.”

The funding woes were written on the wall even as far back as 2015, when NASA chief of human spaceflight William Gerstenmaier announced the agency was planning on giving up on the ISS.

“We’re going to get out of ISS as quickly as we can. Whether it gets filled in by the private sector or not, NASA’s vision is we’re trying to move out,” Gerstenmaier said.

But Dr. Pawelczyk pointed out Monday that we really aren’t prepared for traveling to Mars and, in fact, it’s the work being done on the ISS that will help us get there.

Pawelczyk pointed out several human health risks that stand in our way of getting to Mars. There are a lot of stressors that the human body can experience out in space, including space radiation, and the effects of altered gravity; like bone loss and a weakening of the cardiovascular system.

Right now, the ISS is the only space site for researching how humans fare during prolonged space trips — like the kind that could get us to Mars.

The most consecutive days spent in space on record so far is 438, clocked by Russian cosmonaut Valery Polyakov between 1994 and 1995. That’s still less than two years. It’s estimated to take between 150 and 300 days to get to Mars, depending on the red planet’s alignment with Earth. Pawelczyk maintains we need more research on longer human space durations before we start hurling them off into deep space. According to NASA Watch, Pawelczyk talked about keeping ISS going for at least another decade to conduct research on reducing human space flight risk.

Must Read: The Chances of SpaceX Beating NASA to Mars Just Went Up

More like this
Innovation
2 hours ago
Mars City: 3 Red Planet resources could forge a critical building material
By CAROLYN COLLINS PETERSEN and Universe Today
Innovation
8.9.2022 2:00 PM
A small robot on the ISS will practice performing surgery in space
By Doris Elín Urrutia
Science
8.5.2022 12:15 PM
10 years ago, the Curiosity rover arrived on Mars — and revolutionized the hunt for alien life
By Allie Hutchison
Related Tags
Share: