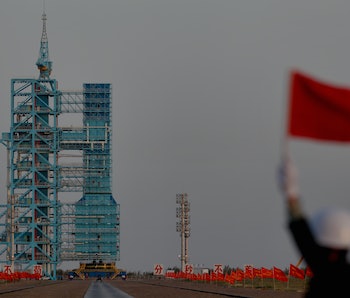 China has already started making moves on its plan to complete a large modular space station within the next three to seven years. In late April, China will launch its Tianzhou-1 — “Heavenly Vessel” — spacecraft into orbit. There, it will rendezvous with the currently uncrewed Tiangong-2 — “Heavenly Palace” — module, which has been orbiting since September 2016. Tianzhou-1 will serve as a resupply craft, and while it orbits Earth, it will dock with Tiangong-2 several times to test propellant resupply procedures. This exercise is crucial to the future of a large space station, since the facility will require constant resupplies of food and equipment for the crew. This mission represents China’s first big step toward building its as-yet-unnamed large modular space station.

China’s progress in space comes at a pivotal moment in United States space policy, as Congress ponders the future of the International Space Station. While the U.S. operates the ISS in partnership with the ESA, Japan, and Russia, the U.S. contributes the majority of the annual operating budget. Therefore, if Congress decides to cut ISS funding in 2024, it would likely spell the end of the station’s operating life. If that happens, China’s new space station would become Earth’s only orbiting space station.

This possibility recently became quite real. On Wednesday, March 22, the House Committee on Space, Science, and Technology convened to discuss the future of the International Space Station, and signs are starting to point towards decreased funding. The hearing, entitled “The ISS after 2024: Options and Impacts,” covered the future of the ISS, whose funding currently goes through 2024. The assembled Representatives and expert panelists discussed the relative merits of continuing to fund the ISS, and one of the dominant themes that emerged was conflicts between funding the ISS and crewed spaceflight.

“Tax dollars spent on the ISS will not be spent on destinations beyond low- Earth orbit, including the moon and Mars. What opportunities will we miss if we maintain this status quo?” says U.S. Rep. Brian Babin, a Texas Republican and chair of the House Science and Technology’s Subcommittee on Space. “The longer we operate the ISS, the longer it will take to get to Mars.”

U.S. aspirations of crewed spaceflight, therefore, may spell the end of the ISS. If this happens, China’s new space station could become Earth’s dominant orbiting laboratory. The next step after launching Tianzhou-1 will be the launch of the space station’s core module, Tianhe-1 with a new-generation Long March 5 rocket. This will take place in 2018 or 2019.