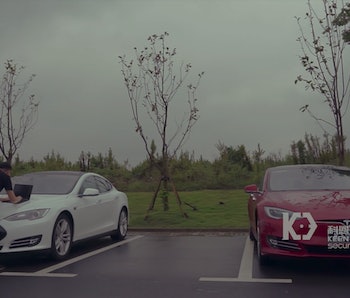 A group of thieves — who also appear to be accomplished hackers — are on a stealing spree across Europe, and their favorite targets are Tesla Model S’s.

The Dutch publication nrc.nl reported on July 13 that 11 Tesla cars have been stolen in recent months, a sharp uptick from normal rates. According to the report, as many as nine may have been stolen in a period of just a few months, if not weeks, before the middle of June this year. The thieves are reportedly using a software exploit to steal the vehicles — one victim’s security camera captured images of a man in a cap and scarf lingering near the vehicle with a laptop before driving off in it. According to a Tesla spokesperson, the vulnerability isn’t limited to Teslas, and the company is working on a software fix.

Electrek first reported the news in English on Monday, noting that Teslas are rarely stolen, mostly because the cars have a pretty reliable constant GPS tracking feature. But nrc.nl reports that the thieves have evidently found a way to bypass or shut down this feature, perhaps by removing the SIM card from the GPS system. Nrc.nl’s report notes that the drivers’ key fobs — the primary remote command device for the vehicle — were not stolen, meaning that the hackers had another way into the car. Electrek posits that it could be a hack of the key fob itself, or of the owner’s Tesla smartphone app, but either way, it’s letting the thieves take full control of the vehicle and disable the tracking system very quickly.

This is almost certainly the same group that stole and chopped up a Model S in late May, making the vehicle essentially vanish into thin air as it was dismantled for parts, including the extremely valuable battery pack. Curiously, nrc.nl reports that 40 percent of the stolen vehicles have been insured by Turien and Co, a Dutch insurance provider.

Here’s the full comment from Tesla’s spokesperson, who elaborated that the company is working closely with Turien to solve the case and fix the problem.

We have rapidly investigated the reported thefts and are working closely with Turien to offer solutions to our mutual customers. Turien has been a valuable partner by assisting in our investigation. While the tactics used to facilitate these thefts apply to many vehicles and are certainly not unique to Tesla, we are uniquely positioned to try to stop them and are developing a software update to do so.

That’s all we know for now, but the company is apparently working hard on a solution, and will likely announce more information after the vulnerability has been fixed. In the past, Tesla has been quick to respond to vulnerabilities in its software, and CEO Elon Musk is confident in the car’s overall cybersecurity. We’ll see how the company responds to this test.