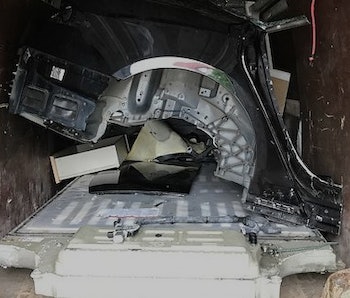 On Wednesday, German Police officers stopped a suspicious truck on its way to the Lithuanian border to see what was inside. When they opened the back doors, they found a sight of unspeakable, and relatively unprecedented horror — a hacked apart pile of Tesla Model S parts, including an entire battery pack, on their way to the black market.

Berliner Zietung first reported the bizarre crime on Wednesday, which made its way onto Reddit because of the sheer peculiarity of the crime. Tesla vehicles are equipped with extremely sophisticated anti-theft systems, including persistent, always-on GPS trackers, which makes them an extremely unattractive target for thieves.

Originally, the driver of the truck told police who bought the parts in Amsterdam, and presented authorities with a bill of sale, which turned out to be fake. The car, as it happens, was stolen in the Netherlands on Saturday.

Here’s what they found in the back:

As several redditors pointed out in a thread about the crime, a normal car can be stripped down, chopped up, and sold for parts in under an hour. But since Teslas are so rarely stolen and chopped, it took the thieves longer to break everything apart. Reddit’s /r/teslamotors forum also had a field day speculating as to how the thieves got around the Tesla’s tracking system.

“I’m imagining if they could sneak one off the street with a tow truck and get it into some kind of Faraday cage (a pretty big one, perhaps a shipping container) where GPS and LTE signals would have a hard time transmitting and dismantling it in there,” humanwire wrote. Teslas have another GPS device in the key fob and can’t be hot-wired in the traditional sense, so stealing one usually requires thieves to physically tow the entire vehicle somewhere. There were some other theories that got pretty deep into the internals of a Tesla as well — turns out, the best-equipped people to steal a Tesla are already Tesla owners, which also probably keeps the theft rate down.

More like this
Innovation
16 hours ago
Can cars run on water? The science of a TikTok conspiracy theory, explained
By Andrew Moseman
Innovation
6.27.2022 8:00 PM
Artificial photosynthesis can grow plants without light — and may solve a planetary dilemma
By Steph Lee
Innovation
6.25.2022 10:00 AM
9 veggies that are healthier cooked than raw
By Laura Brown and The Conversation
Share: