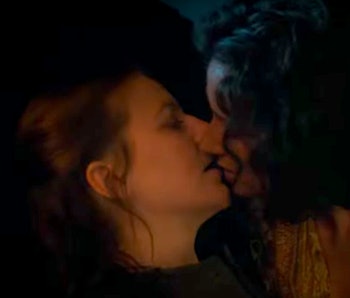 Love (or murder) could be right around the corner for two of Daenerys Stormborn’s allies on Game of Thrones. The preview for Season 7’s second episode, “Stormborn,” premiered Sunday night at the end of Episode 1. Among the promises of violence and the oncoming storm that is Daenerys, two of her allies, Yara Greyjoy and Ellaria Sand, will take a moment to themselves.

The 20-second trailer reveals Yara and Ellaria kissing for less than a second, bringing to light a promise from the Season 7 trailer back in May.

As far as how they’ll come to be together: At the end of Season 6, Ellaria offered “justice and vengeance” to Lady Olenna Tyrell, with Varys clarifying that, actually, they’re offering “fire and blood,” Daenerys’s famed promise. Later, Dornish ships are seen among Daenerys’s army as she heads to Westeros, indicating that Ellaria had officially given her support to the Mother of Dragons. Meanwhile, Yara and her brother Theon firmly stand with Dany as well, indicating that, yes, Ellaria and Yara were bound to meet up.

With both of them being sexually attracted to women — Ellaria indicating her enjoyment of both men and women and Yara being vocal about her love of only women — and this being Game of Thrones, a hookup was practically inevitable.

But all might not be well. Ellaria killed Myrcella Baratheon, Cersei and Jaime Lannister’s daughter, in Season 5 with a poisoned-lipstick kiss to take revenge on the Lannisters for the death of her lover, Prince Oberyn Martell. If Yara or one of her family members has somehow done something to Ellaria or her family, she might consider it worthwhile to betray Daenerys and poison Yara.

Or, Yara could just be partaking in the Greyjoy family tradition of bedding a woman before going into battle.