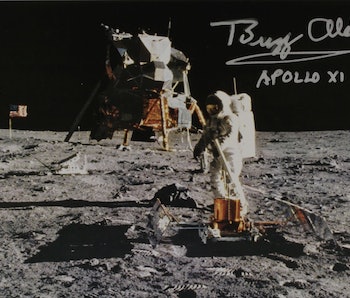 If you’ve ever wanted to own a piece of space history, now’s your chance. On July 20 — the 48th anniversary of Apollo 11’s moon landing — Sotheby’s will host its first “Space Exploration” live auction.

The iconic auction house has amassed a over a hundred artifacts and memorabilia from the space race, including actual equipment, a space suit, and many an astronaut-signed document.

The event is being hosted on eBay, where you can preview of the collection for yourself. It’s estimated to be worth up to $5.3 million.

Here are some of the coolest items up for auction:

One of two known copies of an image of the complex impact crater Aristarchus, taken from Lunar Orbiter 5 in 1967. Comprised of four telephoto panoramas, each made of 8 silver gelatin prints. Starting bid: $80,000.00.

A 1987 presentation model of the Soviet Union’s Vostok-1, the craft that carried Cosmonaut Yuri Gagarin into space in 1961, making him the first human in space. This thing would just look really cool sitting on a shelf in your living room. Starting bid: $8,000.

A 1969 Snoopy Astronaut doll signed on the back by Apollo 10 Lunar Module Pilot Gene Cernan. Snoopy was once the mascot for the Manned Flight Awareness (MFA) Program. Starting bid. Starting bid: $1,600.

This rather innocuous-looking item is said to be the crème de la crème of the auction: a lunar sample bag from man’s first steps on the moon. As nearly all other equipment from the Apollo 11 mission is stored at the Smithsonian, this item is incredibly rare. Minutes after touching down on the moon’s surface, Neil Armstrong collected fragments of surface material and lunar rocks into this bag. Bonus: there are “remnants of lunar dust” left inside the bag. Starting bid: A whopping $1,600,000.

A 1962 thermal coverlayer for the Gemini G1C Spacesuit, made for Gus Grissom, the first man to fly in space twice. Starting bid: $32,000.

A 1970 Apollo system propellant tank with red identifying labels, used to cause thrust for steering the spaceship. The tank was constructed for NASA but was a given away for a student project by the Vice President of Sargent Industries (the manufacturers). Starting bid: $2,000