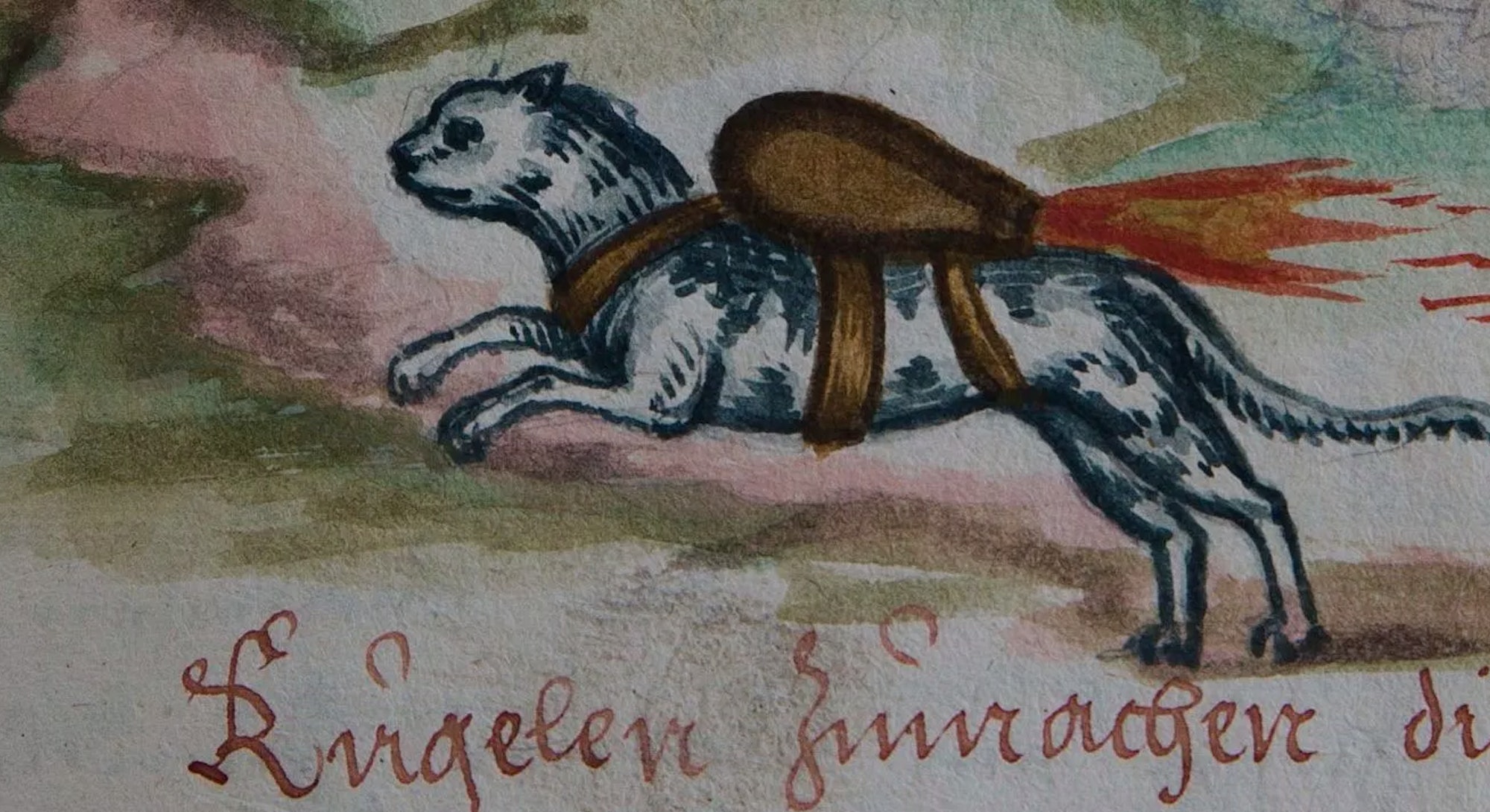 For millennia, humans have been fascinated by the idea of reaching the stars. Ancient civilizations in Babylonia and India, notably, had some sort of space travel narrative. People also have long been fascinated by making things go boom. It’s the confluence of these two concepts — space travel via rocket propulsion — that became the Holy Grail of rocketry dating back to the 1500s. Long before former Nazi engineer Wernher von Braun helped launch the U.S.-Soviet space race of the mid-20th century, 16th century military engineers, amateur enthusiasts, and even a fanatical Chinese bureaucrat helped predict the future of rocket-based space travel. Here’s how.

The current consensus is that the Chinese invented gunpowder (or, black powder) in the ninth century, while, ironically enough, trying to create a potion of immortality. Almost immediately, the technology began to be used for military purposes; initially, engineers tied rudimentary explosives to arrows. The projectiles were still propelled with a traditional bow, with the hopes that the fuse would ignite the gunpowder somewhere close to the arrow’s impact.

Sometime in the 12th century, Chinese engineers began to experiment with propulsion. By lighting the gunpowder in a tube, the resulting gas from the resulting explosion would hurl said tube through the air. The early rocket arrows were terribly inefficient: expensive, slow to manufacture, and horribly inaccurate. But imagine being a Mongol invader and seeing these flaming projectiles! The Chinese successfully used their newfound rocket tech to turn away such invasions throughout the 13th century. The Mongols themselves soon adapted the technology for their own uses, and are credited with subsequently spreading the science throughout the Middle East and Europe.

Reaching for the stars, take one

For the next 300 or so years, military uses for gunpowder slowly evolved away from the use of rockets. Flaming arrows were replaced by the much more efficient guns and cannon (instead of launching a number of tubes, have one tube that could launch an unlimited number of projectiles). However, amateur rocket enthusiasts kept working to find slightly more altruistic uses for the technology. According to legend, a stargazing 16th century official named Wan Hu decided rockets would be his ticket into the cosmos.

As the story goes, Wan attached 47 rockets and two kites to a bamboo chair. He instructed his servants to light the rockets, which would theoretically launch him straight up into the atmosphere, where he would then rely on the kites to navigate him all the way to the stars. You can probably figure out the rest of the story from here. The rockets ignited, there was an explosion, and neither the enterprising Wan nor his chair were ever seen again. While it’s a safe bet that Wan’s departure from the earthly plane did not involve space travel, he is credited with conducting the first experiment (however poorly thought out) exploring the possibility of rocket propelled space flight.

Around the same time Wan Hu was detonating himself to the great hereafter, a German artillery master by the name of Franz Helm was coming up with some rather creative uses for rockets of his own. In an illustrated manual recently digitized by the University of Pennsylvania, Helm’s illustrations depict all sort of wacky rocket-related artillery, but perhaps none more curiously horrifying than the cat that appears to be strapped to a rocket pack.

In defense of Helm, it looks like Jetpack Kitty (and his trusty sidekick Jetpack Pigeon), were not meant to be propelled by their accouterments, but rather to infiltrate enemy camps on their own power sometime before their rocket-powered ordinances detonated. However, academics believe that portions of Helm’s treatise, especially the illustration panels, were widely circulated at the time, and for the next 300 years animals became a crucial part of rocket testing (bet ol’ Wan wishes he would have thought of that).

Most notably, Italian inventor Claude Ruggieri became famous for his attempts at launching cats and dogs into the atmosphere in the early 1800s. While none of his pets made it to orbit, Ruggieri did pioneer the use of parachutes designed for re-entry and landings. Thankfully, the sacrifice of his four-legged friends did not go in vain; though the rockets were generally considered a success, the pets tended to return to Earth in … pretty rough shape. It was the condition of these pioneering quadrupeds that convinced authorities to put the kibosh on Ruggieri’s work before he started his next phase: strapping orphans into his rocket assemblies.

Exploding pets aside, there were some serious innovations made in the 16th century. In the mid-1500s Austrian engineer Conrad Haas wrote a manuscript that hypothesized the type of technology needed to finally create a rocket powerful and stable enough to bring humanity to the stars. He sketched out plans for multi-stage rockets, predicted the use of liquid fuel, and is even credited with inventing the concept of delta-wing stabilizers and the bell-shaped nozzle. In 1540, Italian chemist and metallurgist Vannoccio Biringuccio explained the principles of jet reaction almost 100 years before Newton published his Third Law of Motion.

In 1591, a German fireworks maker named Johann Schmidlap was the first to experiment with Haas’ idea for a step rocket. In essence, a large rocket was launched from the ground, while inside, a second, smaller rocket ignited as the first rocket began to burn out, propelling it higher. Though Schmidlap’s rockets weren’t intended to leave the atmosphere, his dual-staged rocket technology is the basis for technology used to launch the American-Soviet space race some 350 years later.

The work of these 16th century inventors and engineers provided the conceptual basis for modern rocket travel. Russian scientist Konstantin Tsiolkovsky, who is credited with being the father of Russian space travel, gained fame by improving upon Schmidlap’s ideas of multi-stage rockets. American aerospace pioneer Robert H. Goddard perfected Conrad Haas’ ideas on liquid fuels, completing the first liquid-propellant rocket flight in 1926. Wernher von Braun himself credits the tale of Wan Hu as being his inspiration for his early rocketry experiments.