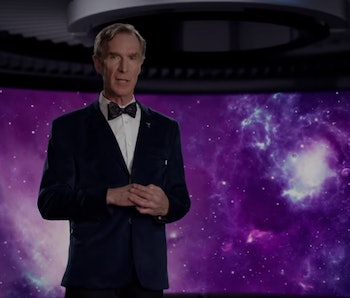 Only Amy Schumer could recruit Bill Nye the Science Guy and a bunch of other comedians to spoof the idea of destiny, an abstract concept that's had its claws in humanity for millennia.

Using a faux-Cosmos set, Nye nails the Sagan deadpan. “Scientists once believed the universe was a chaotic collection of matter,” he begins. “We now know the universe is essentially a force sending cosmos guidance to white women in their twenties.”

Explaining comedy spoils all the fun, but Schumer’s clip is a small bit of genius making fun of people obsessed with chance encounters and "larger forces at work." Schumer's take is as old as philosophy itself, particularly the Stoic school of thought prominent when Zeno was picking fights in Citium circa 300 BCE. The basic takeaway from his work: "It's not about you."

Nowadays, according to Broad City’s Abbi and Ilana, it’s about willing the universe to give you the Apricot Puggle you’ve always wanted, or that terrible news coverage will force Amber Tamblyn to get rid of cable.