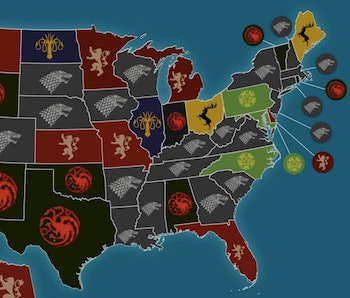 With the new season of Game of Thrones starting on Sunday, speculation around who will survive the oncoming winter and take the Iron Throne is back on everyone’s minds. But when it comes to the ever-shifting fortunes of Westeros’ royal houses, where do America’s loyalties lie?

Enter new data obtained by Decluttr. Based on Google Search data, Declutter — a company that helps people sell stuff from their house online — discovered which Game of Thrones houses (get it?) were being searched for most in every state, using Google data. The findings gives us an interesting idea of what might happen if the entire nation was magically transported to the Seven Kingdoms.

The King (or Queen) of the North comes out on top, with 24 States pledging their search engine loyalty to the ever-decreasing Stark family. In America-Westeros, the House of Stark would nab some significant districts, with California, Nevada, Wisconsin, Utah and New York all in support of the North.

The Lannisters come in second with 10 states on their side, including Arizona, Florida, Michigan and Minnesota.

Despite her ability to conquer Mereen, gather multiple armies, and sail towards Westeros, America is not totally behind the Mother of Dragons. The House of Targaryen is ranked highest in just nine states, including Idaho, Wyoming, and Texas. Is there a western vibe to Daenerys Stormborn?

Even some of the smaller houses have gotten some love across the U.S., including the House of Greyjoy, and the House of Baratheon, which is popular in Ohio, for some reason.

More like this
Entertainment
6.21.2022 1:00 AM
Game of Thrones sequel could ruin the best part of the series finale
By Alex Welch
Science
6.28.2022 4:52 PM
1.8 billion people face once-in-a-century flooding, study reveals
By Tara Yarlagadda
Science
6.20.2022 12:00 AM
Hubble telescope figures out the trick to weighing a lonely black hole
By Nancy Atkinson and Universe Today
Related Tags
Share: