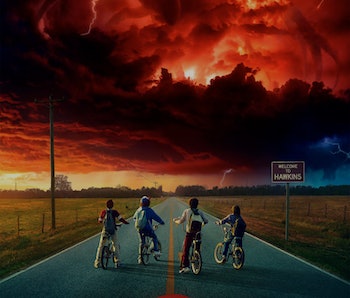 Mike, Dustin, Lucas, Will, and Eleven already went through a lot dealing with the Upside Down in Stranger Things Season 1, but a new fan theory about the monster that’s been teased so far for Season 2 suggests its going to have a hard time breaking into the real world. They might have to venture into the dreaded home of the Demogorgon once again.

“I’m guessing that the monster is actually in the Upside-Down, but somehow the barriers between the different dimensions are breaking down, and, just like the trailer said, ‘the world is turning upside down,’” Reddit user Mamsies commented on the r/StrangerThings discussion of the Season 2 poster.

Mamsies later adds: “Maybe the monster has a physical presence in both dimensions. In our world it creates these storms and takes on this cloud-based appearance, and then in later episodes the characters go into the Upside-Down and see the real creature in all it’s glory. Or maybe it fully enters our world becoming a real physical creature. Not exactly sure how a group of kids will take down a monster that huge though. Maybe they’ll get the military involved.”

The first teaser trailer for Stranger Things Season 2 revealed a hulking, Demogorgon-esque monster obscured by lightning-filled red clouds. And series creators and brothers Matt and Ross Duffer have promised that this season’s Big Bad is more than just a one-off villain; it’ll carry into at least the third season.

However, this monster (that might not even be “real” on Earth) could be a distraction tactic. The real villain might be living in Will, who was last seen coughing up an otherworldly slug at the end of Season 1 and flashing back to the Upside Down.

More like this
Entertainment
5.18.2022 7:00 AM
Stranger Things cast unpack a "quite metaphorical" Season 4
By Eric Francisco
Culture
5.18.2022 9:00 AM
Every Stranger Things monster from Dungeons and Dragons
By Robin Bea
Entertainment
5.17.2022 10:30 AM
Do we really need Black Mirror Season 6? Why the Netflix series has lost its edge
By Dais Johnston
Related Tags
Share: