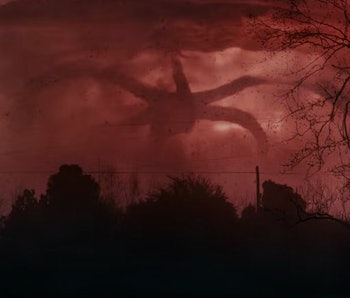 The suburban families of Hawkins, Indiana, might have to deal with something even nastier than the Demogorgon in the near future. While little is known about Netflix’s *Stranger Things* Season 2, series creators the Duffer brothers have revealed a bit more information about what to expect of Season 2’s big bad.

The Duffer brothers spoke with E! News about the upcoming season of their hit Netflix series, and Ross Duffer revealed that fans can expect the new villain of Season 2 to stick around for, at least, more than one season.

“I don’t know if I want to give away more,” Ross said, “but I will say that the threat that is introduced this season is something that will carry over for more than just this season so it will become sort of our main villain, shall we say, for the show.”

In February, the Duffer brothers revealed that they expect Stranger Things to run for four or five seasons, but that it will all depend on the direction the story takes. “Everything changes as we move forward, so we’ll see,” Ross said.

As for what, exactly, the new villain is, fans are still guessing. Many assume it’s the super-Demogorgon-looking creature in the sky that was first introduced in the show’s Super Bowl advertisement.

Other fans, meanwhile, are more convinced that the new villain will emerge from Will Byers. Remember that one of the final scenes of Stranger Things Season 1 was of Will flashing back to the Upside Down for a moment while panicking in his bathroom. It seems Will isn’t out of the woods yet.

Hopefully, more will be revealed before Season 2 of Stranger Things premieres on Netflix on Halloween, October 31.

More like this
Entertainment
Jan. 18, 2023
Everything you need to know about That ‘90s Show on Netflix
By Claire Fox
Culture
Jan. 25, 2023
30 years later, Star Trek is about to pay off a massive villain comeback
By Ryan Britt
Entertainment
Jan. 20, 2023
Surprise Invincible Season 2 trailer reveals late 2023 premiere
By Eric Francisco
LEARN SOMETHING NEW EVERY DAY.
Related Tags
Share: