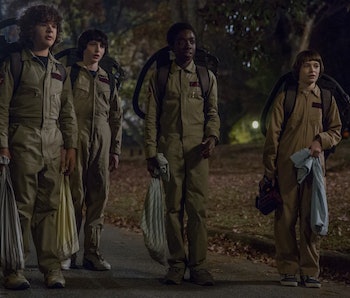 While some fans might be hoping that Stranger Things keeps getting renewed indefinitely so the misadventures with the Upside Down never end, a recent interview reveals that the showrunners — Matt and Ross Duffer — have fairly firm plans for the show to last only four or five seasons.

While speaking to Entertainment Weekly, Ross Duffer admitted those plans were tentative, but he and his brother have, at this point, a solid vision for where they want Stranger Things to go. “Everything changes as we move forward so we’ll see,” he said.

Far too often, shows might either get canceled too early or simply go on for too long after initial success. The first isn’t a concern given how big a hit the series has been for Netflix, but Matt Duffer did admit that he doesn’t want Stranger Things to be “one of those shows that runs out of gas and they lose it because they’re losing interest. You wanna end when you’re on top.”

Their approach has always been to tell a singular story with closure over the course of a season, much like how Season 1 saw the resolution with the Demogorgon and the supposed death of Eleven while still teasing Will’s ongoing, ahem, ailment.

“I want it to have a really finite ending,” explained Ross. “Hopefully you’ll come to the end of Season 2 and feel fully satisfied and want more but you’ll feel like it has come to a conclusion. But also we’ve laid the ground work for further seasons.”

We’ll see if that’s the case this Halloween when Season 2 drops, but thankfully we’ve got at least two more seasons after that to look forward to.