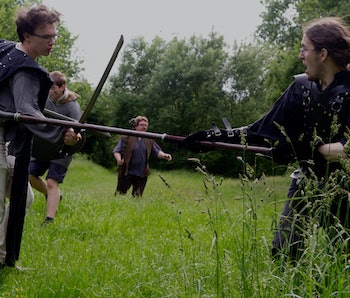 A Texas bill passed in mid-June will allow for the open carrying of knives, swords, and “hand [instruments] designed to cut or stab another by being thrown” beginning September 1 to the elation of cosplayers across the state.

The bill, House Bill 1935, removed rules on the type of weapons that were legal to own and replaced them with location-based restrictions. This means that unless you are at a sporting event, a venue that serves alcohol, an amusement park, a medical center, or a house of worship, all bets are motherfucking off.

In a nuanced, thoughtful reconsideration of the original law that prohibited the open carry of these weapons, the Texan legislature literally just crossed all of those restrictions out with a red pen and called it a day.

Swords, knives with blades 5-and-a-half inches or longer, daggers “including but not limited to a dirk, stiletto, and poniard,” bowie knives, spears, and the aforementioned throwing knives/ninja stars are all fair game under this new law.

According to LegiScan, H.B. 1935 is a “bipartisan bill,” a fact that offers a glimmer of hope in today’s gloomy political climate. It is truly inspiring to see politicians on both sides of the aisle set aside their differences and collaborate to grant the people of Texas the right to bring the force of a medieval armory in public with almost no stipulations attached.

More like this
Innovation
6.24.2022 5:00 AM
Beam-steering radio technology could help autonomous cars finally hit the road
By Sascha Brodsky
Culture
6.28.2022 9:00 AM
8 sensational sci-fi shows and movies coming to HBO Max in July 2022
By Robin Bea
Culture
6.27.2022 1:30 AM
Who is Christina in 'Westworld' Season 4? Evan Rachel Wood explains her "new" character
By Mónica Marie Zorrilla
Share: