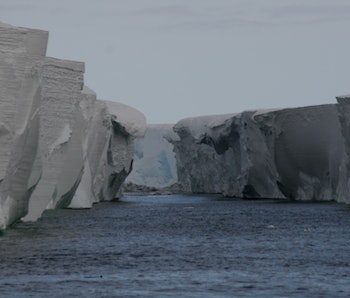 A massive iceberg just split from the Larsen C ice shelf in Antarctica. It’s the third largest floating chunk of ice humans have ever documented. The iceberg that sank the Titanic looks like a single snowflake in comparison. While we don’t have great numbers on that one, it was an estimated 200-400 feet long; The Larsen C ‘berg is about 100 miles long.

The enormity of the iceberg has left journalists everywhere grasping for comparisons that will help people understand just how huge this thing really is. Climate Central visualized the iceberg as a giant snowball (its actual shape is closer to a pancake) and placed it next to photos of cities and landmarks — including New York City, Mt. Rainer, and the Grand Canyon — to give a sense of its heft.

Some comparisons are more helpful that others — and some are flat out wrong. Business Insider has repeatedly insisted that the volume of ice could fill Lake Michigan, when it, in fact, would only go up about a quarter of the way. A National Geographic video says the iceberg is as big as NYC, when it’s actually seven times as big.

In the spirit of getting things straight, here’s a not-at-all-comprehensive list of things you could compare with the iceberg, by area, mass, and volume.