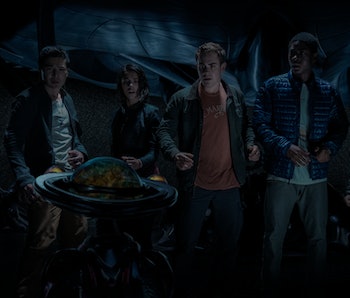 It’s been a little more than a week since Saban’s Power Rangers became available on Blu-ray. After a lukewarm performance at the box office and cold reviews from critics, prospects for sequels are in doubt. What makes that extra unfortunate is that there’s a good movie underneath all of its CGI and circa-2009 teenaged angst.

In spite of its flaws, Power Rangers was a fun sci-fi adventure that didn’t seem too gritty or too goofy. But there was also something about Power Rangers that just didn’t click, even for a die-hard fan such as myself. I just didn’t know what was missing — until now.

After perusing through the Power Rangers Blu-ray, I can say for certain what was missing: The deleted scenes. Packed with revelatory emotional beats and sharp performances from its cast, including the deleted scenes from Power Rangers would have made the movie much better, and more coherent; the scenes fleshed out characters, and would have given the movie a more solid foundation for both its jokes and intrigue. In fact, a handful of these scenes seems downright necessary.

Of course, scenes are cut for a reason. Often it’s an issue of time. In an interview with Inverse, director Dean Israelite said he cut these scenes for exactly that reason. “Once you load them into the movie, the movie buckles under its own weight and it becomes too long of a journey,” Israelite said. “So while I love them, they don’t fit in. But I do think they’re illuminating and interesting if you like the movie. You’re going to get something out of them.”

After watching all 33 minutes of these deleted scenes, I have to respectfully disagree with Mr. Israelite. They are illuminating, and getting to know characters better for an extra five minutes wouldn’t have bogged down the experience. In fact, as in the case of the “Ultimate Edition” of Batman v Superman: Dawn of Justice, further investment in more defined characters (as well as explaining some lingering, annoying questions) actually makes time zip by, because now we actually care about these teenagers with attitude.

Here are just some of the scenes that absolutely belonged in Power Rangers.

In the film’s first act, in which the Rangers arrive for detention, Kim (Naomi Scott) and her parents actually talk, a conversation made tense by its single angle. There’s a better foundation for the “They put it back” joke, but mostly we get to know Kim’s backstory a lot earlier than in the final version. This scene doesn’t improve Kim as a likable character — in fact, she’s even less likable now — but without this scene, her story seems rushed.

Jason vs. His Dad

Another argument between parents and kids. In the movie, all we know about Jason’s dad is that he just wants his son to play football. But in a deleted scene that takes place in their kitchen, the two try to have a normal conversation… before it becomes a shouting match. Montgomery’s performance is its strongest here, which reveals just how bad he wants his son to get a scholarship. And just how desperate was Mr. Scott? He begged the local paper to write about his son. And he’s got copies. Without this scene, Jason seems spoiled and aloof, but with it, we actually understand his frustration with the expectations placed upon him.

There’s a lot of sloppy editing and bad camera work in Power Rangers, so it’s curious why they sacrificed this funny visual gag, in which Jason learns what car he’s actually going to drive with Billy (RJ Cyler).

“It’s crazy how someone stole the van.”

After the Rangers’ late-night joyride that resulted in Billy’s mom’s car getting totaled, it was strange how it was never mentioned again. Especially by Billy’s mom. Wouldn’t she get mad that her van was destroyed? Well, the next day, Billy reveals he’s worried about what to tell his mom. Jason gives him a solution: “It’s crazy how someone stole the van.” It takes Billy, who doesn’t understand sarcasm, a few seconds to get it.

Another deleted scene with Billy and his mother would have paid off the joke, too.

Before Kimberly tricks Trini (Becky G) into diving down with the other teens, Trini — who came back hoping to get rid of her Power Coin, so that solves that mystery — and Kimberly learn each other’s names. In the final cut, the film tried to make a running joke out of no one knowing Trini’s name, but it fell flat. With this scene, that joke would have had the proper set-up.

You know how the Rangers pass through a pool to get to the command center? Yet Kimberly was able to use her phone — which she crushed to pieces in an earlier scene — as a flashlight in the cave? That’s because in a deleted scene, it wasn’t her phone. It was Billy’s, and of course, it was waterproof. Plot hole solved!

One Night in Angel Grove

One major beat the movie lacked was a moment of self-doubt for the new superheroes. One of its deleted scenes included this beat in a montage, which would have helped ground the Rangers’ doubt about each other and of themselves before earning their rise to victory.

Actually, no. Hell no. I’m glad this was cut. This was bad. The film definitely tried to get a romance going between Jason and Kimberly, but I’m glad it never worked because Kimberly is an awful person.