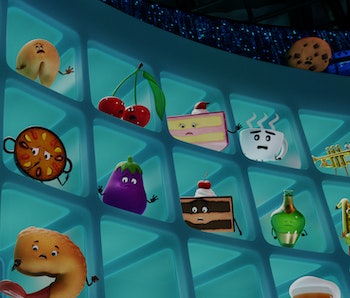 Everyone at the Emoji Movie press day had internet trolls on their minds. When presenting preview footage from the animated film to a group of critics and journalists, director Tony Leondis brought up the idea that naysayers had already written the movie off. “In this scene,” Leondis said excitedly, “we see our heroes confront actual internet trolls, who are just hanging around criticizing people because they have nothing better to do.”

The energy among the cast and crew of The Emoji Movie is relentlessly, infectiously positive. Actor T.J. Miller, who plays the film’s hero, Gene the “meh” emoji, echoed a similar statement when speaking with Inverse. Perhaps to head off any questions about blowback they’ve received as artists working on what could be seen as a high budget, two-hour commercial for smartphones and apps, both Leondis and Miller are quick to interrogate why someone might not see The Emoji Movie. After watching the footage, which was admittedly light and fun, though peppered with references to actual products, it’s easy to see why Leondis perceives his film as a fun experience in addition to being a product of capitalism. Those things aren’t mutually exclusive, he seems to believe.

In fact, speaking with Inverse at the Sony building, amid piles of cupcakes and plushies shaped by the poop emoji (voiced in the film by Patrick Stewart), and dancing people dressed in mascot-style costumes, Leondis explains that the The Emoji Movie was his pitch as an artist, not an imperative from a corporation.

Wait, you pitched the movie to Sony? This was your idea?

Yes! I was thinking, what are the next toys for a great animated movie? I looked down at my phone and realized that all kids now know these little characters. They’re so important to us now when we express ourselves. The human heart has found a way to connect technologically, and I just think that’s incredible. When my mom sends me a kissy face, it truly means something to me! Of course, she goes overboard — heart, heart, heart — but that’s part of her voice to me now.

So yeah, I thought, this is a great arena for a story. People have been going into video games since Pac-Man in the ‘80s, but no one has tried telling a story centered around the smartphone. The natural story occurred when I realized that emojis all follow a similar pattern, every one of them is essentially the same. My imagination kicked off from there, thinking that they all sit in cubes waiting to be selected. Then, I realized each app could mean a different world for them.

So, if your film isn’t just a long commercial, what makes it a worthwhile story?

I think it’s all from the human point of view. You build a story around your characters more than the products. The studio, believe it or not, was very against us making a long commercial, and they made that clear.

Most people think The Emoji Movie will be this wacky adventure, but I come from Disney, and Walt Disney always said, “With every heart, there’s a tear.” Each of our characters experiences emotion of that magnitude here. It’s a human, emotional ride.

You mentioned in showing us clips that you thought about growing up gay while writing the film. Can you tell me a bit more about that?

Yeah, I grew up gay in a religious household. My dad is a Greek Orthodox priest. I always felt that I was an “other” and different. Growing up, all kids want to be the same; they want to fit into the pack. I felt at the time that no one understood what I was going through. Pretty soon, I realized it wasn’t just about being gay, it was that everyone feels excluded or like an “other” at some point in their lives.

I’m not gonna lie, the fear of who’s different is only getting worse around the world right now. The fear of the other. I think what our movie is about is that we’re all essentially the same. The human condition connects us, and that we should embrace difference and not be threatened by it.

You work in kids’ film, though. How do you tell a story with those stakes without talking down to your audience?

Metaphor is dead in the film world today, and animation is this place where you can still pull it off. Movies like Marathon Man — shows you how old I am — the way they use that metaphor to carry us through a story, that’s incredible. That’s what I love about writing for children, telling the most honest and human story you can within the confines of a metaphor.

So when your main emoji characters explore apps, all those apps are working as part of the metaphor?

We really tried to make the apps a part of Gene’s journey and Jailbreak and Hi-5’s emotional growth. We didn’t want it to feel like a big commercial grab, which is really hard for apps! Am I allowed to say that? Too late.

All the companies we talked to wanted their apps to feel like a part of the story. We weren’t just going to have the characters visit a certain app without the experience pushing their growth, and the story, forward. And some apps didn’t feel right, so we scrapped those ideas.

Facebook, for example, is the world that sparks the conversation between Gene (T.J. Miller) and Hi-5 (James Corden) about what defines a fan vs. an actual friend.

How did you get T.J. Miller onboard?

I wrote the lead role, in part, for T.J. He came in, and we pitched him the story. You know, he was unsure until he heard the story, but after we explained what we wanted to do, he was all in.

He came in and punched up everything. You know, he’s surprisingly focused, though he seems like he’s gonna be a bit “out there” in person. When it comes to the work, he’s so focused and succinct. We ended up mind-melding.

Here’s why I wanted him: When you think of irrepressible, you think of T.J. But he also has this surprising ability to break your heart, and we let him do that there. He’s so truthful in some clips, especially between him and Jailbreak (Anna Faris), that I swear, it makes me tear up. You have to be able to break hearts in animated film — the best ones always do.

More like this
Culture
Jan. 28, 2023
Sci-fi legend René Laloux’s final movie is his most opaque — and maybe his best
By Jake Kleinman
Entertainment
Feb. 2, 2023
Everything Wrong with Netflix’s New Password-Sharing Rules
By Dais Johnston
Entertainment
Feb. 4, 2023
Superman: Legacy Will Reinvent the Man of Steel — Everything to Know
By Eric Francisco
LEARN SOMETHING NEW EVERY DAY.
Related Tags
Share: