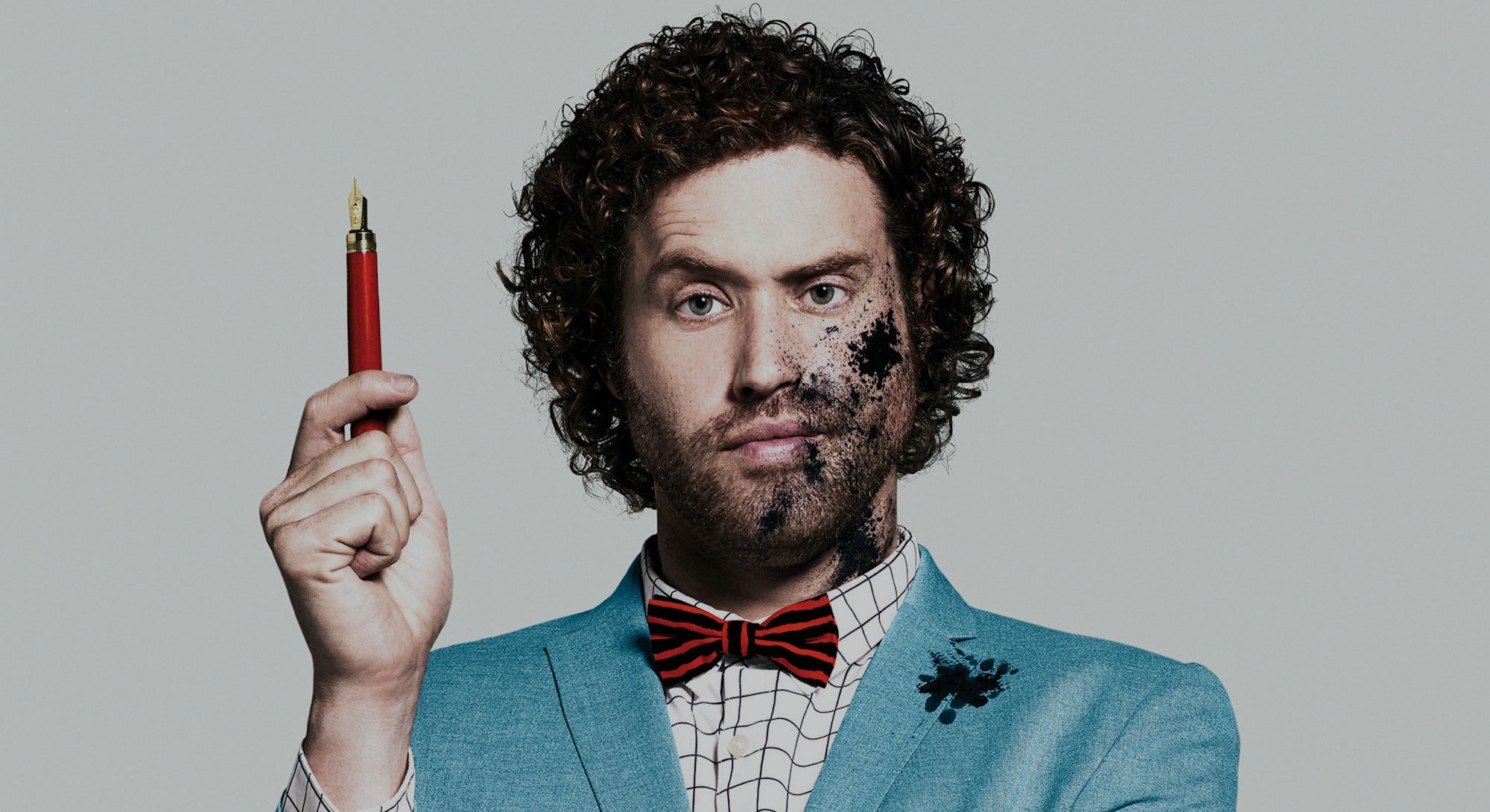 Actor and comedian T.J. Miller says he’s pretty confident that selling out early is a good career move. Season 4 of HBO’s Silicon Valley was his last as Erlich Bachman, and this July he’ll voice the “Meh” emoji in Sony’s The Emoji Movie. He also produces and hosts Comedy Central’s The Gorburger Show and just premiered in a stand-up special, Meticulously Ridiculous, on HBO.

Miller’s stand-up, both live and recorded, is a bizarre ride: his funny, well-written jokes punctuate long stream-of-consciousness tirades about the nature of time and whether there’s a God. During these winding monologues, he appears to lose his own point. Despite his material sounding almost hallucinatory, and aside from most of his memorable roles being unhinged stoners, Miller is actually very cautious in person.

When he sat down with Inverse in late May, he apologized ahead of time for rambling, and warned his publicist that he had to make his flight back to California. “More often than not, I miss it, and it’s my fault,” he said. “I just keep talking.”

You parasailed into the Cannes Film Festival last week, right?

I don’t take myself seriously at all, so the only way for me to come to Cannes for the first time was to parasail in. I was high-fiving the ice cream cone emoji and dancing. The Emoji Movie is sort of a silly concept in itself.

Kate [Gorney, Miller’s wife] met Tilda Swinton at Cannes, and Tilda was like, “Wait, didn’t you parasail in? Oh, that’s brilliant. But … are they showing The Emoji Movie at Cannes?” We were like, “No, no, god no. We screened a trailer.”

I saw you on Instagram posting Emoji Movie signs on your hotel. Would you say you were being aggressive or sarcastic about the PR?

I mean, yeah, I like popular art, commercial art. I’m obsessed with Andy Warhol, and I also do this because I think life is kind of a tragic, challenging endeavor. You can give people the opiate that is comedy. Essentially, I’m a drug dealer.

The real reason I was so aggressively advertising it was … we were in the Carlton Hotel on the corner, so thousands of people walked by and saw these Emoji signs hanging … I was sort of using a middle finger, uh, emoji to the pretension that exists at Cannes. They’re like, a “Netflix movie isn’t a real movie, women have to wear heels.” There’s that side of it, and that’s why I’m taping Emoji signs to the windows.

So you were showing your pride at being in The Emoji Movie.

Well, it’s no Yogi Bear 3D, which is the seminal work in my career. I’ve just been spiraling out since then.

Yogi Bear 3D, god that was a good movie. I wish I was back there instead of doing press for this fucking film! See, my publicist leaves the room, so I lose my mind.

Is there a takeaway for people who see The Emoji Movie? What do you want them to learn?

The world of the film is almost kind of … it’s not cliché, but it’s much more straightforward than ours. The relationship between emojis is complicated. Jailbreak is a selfish person, Hi-Five only cares about popularity, and likes, and followers, Gene has no friends because he’s weird. He cares about friendships and loyalty a lot and thinks that’s important, but he hasn’t made friends yet. Strangely, none of them really know how to express how they feel about each other. The theme of the movie is present in the real world, inside the phone, these themes of friendships and loneliness. The best you that you can be is the authentic you.

How has the public reacted to the movie, this far?

With a movie like Emoji, if I’ve experienced trolling, I mean … We make fun of trolls in the film; these people online who have this “meh” attitude, they’re just over everything. I thought it would be funny if I sold out at the beginning of my career, so there is no real selling out. From the get go, I’ll do the most ridiculous projects, because I’m also lucky to be in Deadpool and to have the experience I’ve had on Silicon Valley, a show people think is so cool. I produce this show Gorburger on Comedy Central, and I do stand-up…

I know, I’ve seen you live.

Oh! Well, I just did this underwater thriller with Kristen Stewart and William Eubank, the coolest man at Cannes, who was filming while smoking cigarettes and wearing a bathrobe. That’s going to look cooler than any movie has ever looked, and it helps offset that I’m in The Emoji Movie, which is a tier III Wal-Mart advertising deal. And, you know, Transformers 4. If you see my stand-up, you don’t think, “He’s definitely going to be in Transformers 4, the reboot with Mark Wahlberg.”

Well, dramas need comedy to ground them, and in the Eubank film, I’m not like, “hilarious joke joke wacka wacka ding dong man,” but I got a crash course in fitting that tonality with Cloverfield. It also made me immediately have to figure out how to be funny with only my voice. How to Train Your Dragon was different, but I had some experience. I did the sequel, and then they came to me about Big Hero 6.

There’s gonna be people, like with anything, who won’t buy into the imagination within The Emoji Movie. That’s on them. The film is essentially a commentary on people like that.

You’re a protagonist in Emoji—

The Emoji Movie is the first time you’ve played a protagonist. How do you feel about that role?

I approached it with a bit of anxiety, knowing that I’m the center of the film. I talked with my team in L.A., and they said we’ve been looking to put you in the center of an animated film; it seems like the town is open to that and wants it to happen. I’m glad it’s happening now. I feel lucky about the timeline of my career.

You look at Amy [Schumer], who’s doing wonderfully — she does the sketch show, explodes, then Trainwreck, explodes … Meanwhile, I’ve been working in the trenches. This is the way I get to have a movie with Dreamworks, which I’m writing, and to have Spielberg put me in Office Christmas Party and then Ready Player One. I told Spielberg my plan, actually, why I was on so many platforms and taking so many roles, and he said, “Oh I know, I’m watching. I’ve seen everything you’ve done.” That’s terrifying. I just imagine him watching Gravity Falls with a bucket of popcorn.

So you want to play more grounded characters?

People know me as the guy who walks in a room, insults everyone, is a blowhard, because of Silicon Valley and because of Weasel [in Deadpool]. I’m good at that. When people heckle you, you have to shut them down, and people heckle me a lot.

Well, yeah, on the street they try and hug me. It’s this strange thing where I make a living looking like I could be your best friend. The characters I play are the ones everyone thinks, “Oh, I could totally hang out with him,” and then sometimes the public thinks we’re already friends.

Anyway, from that practice, and from years of stand-up, I’m really good at taking stock of someone and cutting into them. It’s nice to do something like Office Christmas Party, where I’m a puppy dog of a man. Even something like The Emoji Movie is a bit of a tearjerker at times.

Anna Faris [who voices Jailbreak, Miller’s character’s love interest] and I adore each other. You can feel Anna really talking to me, when I was doing my recording, and when it was with Ilana Glazer, who was previously cast, it wasn’t as good. I don’t know Ilana, but I know Anna very well, so that chemistry really works, and you want the characters to be together in a different way.

Jailbreak is a pretty dead-on example of the Hackette trope. Tough, no friends, one neon stripe in her hair.

Women have limitless potentials in the film! Jailbreak literally busts a glass ceiling at some point. She makes this point in the script that I didn’t even realize: In the first emoji set, the only two girls were a princess and a bride. It made me clearly think, “Oh, I guess women are told there are your three options for your life. If you wanna work with men, you need to act like a man in the workplace.” We just totally take that and smash it to pieces in the film.

In this administration, in this climate, we want women to feel like just because of what’s happening temporarily, it doesn’t change your potential; you still have that freedom. We still live in the land of opportunity. I’m not as much of a feminist as my wife. She’s, like, brilliant, but I’ve become sort of a radical feminist, which means I’m bitchin’. I’m moderately comfortable using the word bitchin’.