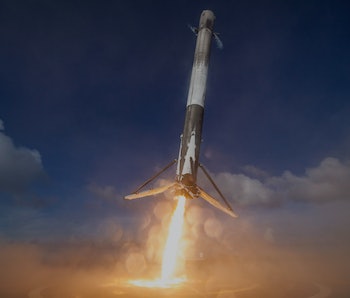 SpaceX rocket landings are now passé. Okay, that’s not true at all — every landing, though now predictable, is still quite an exhilarating thing to watch — but how do these feats of engineering come together?

The company’s 80 percent success rate for rocket landings belies the fact that launching a Falcon 9 rocket into space and then bringing back the first stage booster to Earth in a vertical landing is incredibly hard. A fourteen-story piece of tube made of aluminum-lithium alloy, with fire bursting out the end, doesn’t just make a smooth perch for itself in a giant empty field.

A SpaceX mission is comprised of several different steps, but while the whole “launch” and “flight” parts are pretty conventional, its after the separation of the first and second stage rocket boosters where the fun of the landing process begins. Here are the steps behind a Falcon 9 booster landing.

After the Falcon 9 leaves the atmosphere, the first stage will separate from the second stage. This happens at least 50 miles high, but can happen much later too if the mission payload is being delivered to a higher orbit. The higher the orbit, the harder the landing process becomes. Although the first stage is separated, it doesn’t immediately begin to descend, coasting for another 50 miles or so as it slows down.

While it’s coasting, cold gas thrusters are turned on the flip the first stage 180 degrees, so that it descends with the bottom facing the Earth.

Three of the nine booster engines turn on to begin guiding the rocket back down to Earth towards the landing site or one of the company’s two ocean droneships. It’s traveling at about 3,000 mph at this point.

The supersonic retropulsion burn begins with the center engine turning on, as the booster starts to enter the Earth’s atmosphere once again. The grid fins come out to stabilize the rocket and slow it down as it makes its descent. The rocket starts to become completely vertical, and finagle itself into a more elegant fall back to the surface of the planet. It starts to slow down to about 560 mph.

One last engine burn ignites as the rocket slows to a crawl of about 5 mph. Four legs made of carbon fiber and aluminum unfold to allow the rocket some stability upon touchdown, augmented by the ejection of compressed helium.

The Falcon 9 first stage booster makes it back down to Earth. Engineers come to rocket (either onboard the droneship or sitting at a solid landing site) and secure it. The whole thing takes from launch to landing, takes about nine minutes.

More like this
Innovation
6.15.2022 9:00 PM
Vulcan vs. Atlas V: What you need to know about the ULA's next mega-rocket
By Harry Stoltz
Science
20 hours ago
Virgin Orbit targets June launch window for U.S. Space Force collaboration
By Doris Elín Urrutia
Science
6.27.2022 8:45 PM
NASA found the crash site of the rocket booster that hit the Moon in March
By Kiona Smith
Related Tags
Share: