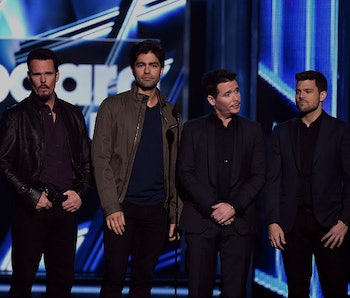 Ladies and gentleman — the boys are back. We’re officially within striking distance of the Entourage movie, a feature that will be released June 3. If the projections I’m seeing are accurate, it’s likely going to be the greatest movie of all time.

First off, it's got the thing all great movies have: Liquor tie ins.

Also, rich character development: Ever heard of it?! Doug Ellin is the Ken Follett of mainstream media.

Did you hear what I said?

This book, in its way, is sort of magnificent. I'm not sure there's a way to describe pages upon pages of detailed sexual exploits by a fictional television character with any other phrase besides "next level." Behold:

Titillation Factor — In 2014, Hollywood was rocked by a celebrity naked picture hacking scandal, commonly known as the “Fappening”. Some nerdy perverts hacked into Apple’s “cloud”, stole all the celebrity dick and tit pics, and then uploaded them to spank banks on the deep web. The list of affected celebrities read like a who’s who of the A-List, many of who had gone to great lengths to keep their goods off-screen and offline. It was an appalling, criminal breach of personal privacy and the affected celebrities were rightfully outraged (as were their boyfriends and girlfriends who had to kiss their long-distance celebrity sexting sessions goodbye). Once the smoke of outrage cleared, however, one couldn’t help but notice the positive impact the Fappening had on the star power of the naked celebs involved. From a branding perspective, it was a perfect leak because it confirmed for America that their sweethearts had naughty streaks. As my man, Ludacris, pointed out a few years back, men want a girl who is a “lady in the street but a freak in the bed”. The Fappening showed that several of Hollywood’s most consummate professionals had not lost their youthful wild side.

America needed the boys — the boys are about to heed the call.