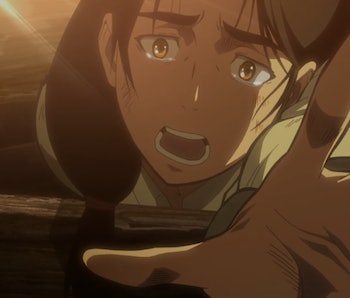 Explain to me why I have to do this again?” my mother asked, grimacing as she looked at a still shot from an anime in which slack-jawed, brainless giants bust through massive walls and delight in eating humans. “Just tell me what you see,” I said.

In Attack on Titan, a young soldier named Eren Jaeger joins the military years after his mother is devoured in an attack by giant carnivorous beings known as Titans. When he discovers that he has the ability to transform into a powerful Titan himself, the war against the monstrous giants changes forever — but my mother, Tina-Marie, didn’t know any of this when I showed her random pictures from the anime and asked her to describe what was happening.

Attack on Titan is a gruesome, bizarre show that juxtaposes the beauty of the natural world with over-the-top violence and gore. The monsters are humanoid kaiju, essentially giant zombies, and the human soldiers that fight them zip around with a grappling system that lets them swing like Spider-Man to kill them by cutting their weak point at the base of their neck.

But what would a person who’s never watched anime in their life, let alone a hyper-violent one, think of what they might see from Attack on Titan?

Well, this just looks like some sad people possibly hanging out at the bar. I thought you said this show was weird?

WOAH. Well, first of all, you see muscle, but the muscle is under the weird bone-looking structure, which seems very odd. I always thought it was the other way. That guy’s mouth … that’s just incredible teeth. Why does he have so many? That’s just crazy. This is crazy. He’s gotta be some type of monster. He’s a heckuva lot bigger than the other guy.

What would they call these people? The big ones?

A freak I guess. It’s just not normal. He does not look nice.

What do you think about the smaller guy? What’s he doing?

It looks like that poor boy is trying to get the big guy’s attention for some reason. And there’s fog or something. What is going on?

Woooaahhhh. Really now. I had my suspicions before, but now I would definitely have to say this is some type of Purgatory thing. You’ve got all these different body styles, and it appears that everybody has some type of wound. The guy with the hair that’s bending over, it looks like he has a penis on his face — maybe I’m just not seeing it well. But that bent-over guy is a little weird.

Um, weirder than the guy on the right?

Oh my god! That guy with the really big eyes and teeth!? He looks like he’s going to chew his way out of where he is if his eyes don’t pop out of his head first.

How do you think this relates to the other pictures you’ve seen?

These guys are probably related to the big ugly monster that had muscle under the bone. He probably has some similar trait or friendship with them or something. The thing is, though: they all have different body figures for some reason.

Why do you think that is?

Because we’re all different, and so are they.

I can’t argue with that.

Woahhh. I would really hate for him to sneeze on me. He looks like the same creep from the last picture.

That is the same creep from the last picture. So what do you think the big people are doing?

I would say that these people are their own type of people. You’ve got the regular humans and then these big people. It does seem like they all clench their jaws, so they’re probably mad about something, aren’t they?

Why are you laughing?

Ooookay, yes. That would go down to — yes. Yes, those … those people from the other picture. I mean, gosh. … I guess those big monsters, or freaks, they’re their own breed for sure.

It looks like that guy is trying to floss that big guy’s teeth or climb in there and get something. That other guy is falling off the roof or got thrown out of the big guy’s hands. You can tell there’s some type of disturbance going on because there’s smoke in the background.

Ohhh myyy. Yeah. I think — gosh — his species or gang of giant people, they want to eat the little guys!

It almost looks like this one has burns or something on his face and tongue. He has these marks everywhere.

OOOoooh wow. It would appear to me that the one guy is trying to run forward but some force has sucked him back. There’s like a ray of light. See what’s shining off the little boy’s head? You can see that their faces are in pain. “White Hair” is some type of monster that charged them and took them by surprise.

I’m surprised you haven’t brought this up yet, but what do you make of all these people being naked?

Ohhh, let me see. I would have to say … that person’s head is large. She has a huge head and seems really surly. She’s definitely a monster. The guy seems to be bowing or something — or running away. She’s definitely from that little clan of freaks.

Something uncomfortable just happened. That thing really has a very large head. It appears to me that she’s like, “Huh, I could have you for lunch, but I’m not sure about that.” She’s thinking about either eating them or taking their souls.

Because this is Purgatory.

Yes. They’re demons or enforcers in some kind of Purgatory. These freaks are all naked.

It really is SO creepy. He looks like a peeping Tom or something, but he’s so large that he can’t look through the window of the house. And he has a weird face. I wouldn’t want to be in a room alone with him.

How intelligent are these big guys?

This guy is probably the slowest of them all. I don’t know about the others.

Woah … see here we go again with them being their own kind, the giants. They appear to be just … wow. I look it as they’re spying on these two people. It’s almost like the Trolls from that movie [Trolls] I watched recently. The big ugly goons only ever get happy if they eat a Troll, and the Trolls are really small. I think that they’re listening and spying so they can eat them.

The big guy’s ribs are showing — the big guy! The monster! The giant — it looks like he’s wasting away or starving. Poor thing. The boy is fighting him and the ninja on the left is … is … injured or something. I don’t see why he would try to punch the big guy. It seems mean.

But it also kind of looks like he’s giving the little guy a high-five. His smile is also weird. The big person has horse’s teeth.

Ohhhh wow. It almost looks like his muscles are coming out of his body and over his skin to go over his bones or something crazy. It looks like he was one of those soldier people. You can see the brown coat a bit. He must be related to the people that have swords.

So why do you think he’s got the muscles on his face?

I think that maybe he’s transforming into those things in Purgatory. He’s somehow gotten into Purgatory. Must have been a bad kid.

So, what is this show about?

Some kind of Purgatory. I think that the big people are regular people that turned into the big, ugly people. The little people are trying to save what they lost, almost like The Walking Dead — like an end of the world thing. For some reason, these little people here think that, “That’s possibly my dad. Can I reach him and bring him back?” It’s obvious to me that the city is burning and there’s a reason why there’s fire. The little people are probably hoping they can fix the demon or disease out of the big people. Meat Face is looking at little guy not like “I won or you lost,” it’s more like “Hey, I know you and remember you.”

Do you have any final thoughts?

I would never watch this cartoon or “animate” or whatever you called it. I would not waste my time on it. I would maybe just watch it because it’s so effed up that maybe it means something? A good way to eat a bowl of popcorn … maybe.

It is interesting that they show you the bright green grass and hills and gorgeous skies; it’s almost heavenly. But, it’s so violent! Because these monsters are so big, it just makes me think of fallen angels that God had to destroy or something.

More like this
Entertainment
Sep. 26, 2022
Rick and Morty’s scariest episode ever copies the best sci-fi of the year
By Corey Plante
Entertainment
Sep. 20, 2022
Rick and Morty Season 6 Episode 3 ending explained: Who is Morty's son?
By Corey Plante
Gaming
Sep. 20, 2022
You need to watch the best cyberpunk anime on Netflix ASAP
By Hayes Madsen
Share: