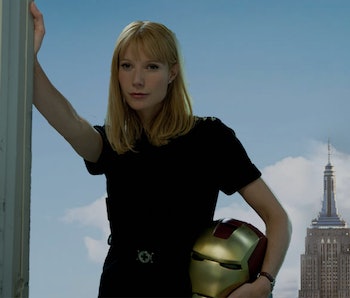 Spider-Man: Homecoming brought everyone’s favorite web-slinger to the Marvel Cinematic Universe with an amazingly reviewed standalone debut, but the film also brought another MCU character back into the fold. That’s right, Tony Stark isn’t the only Iron Man character who pops up in Homecoming: Pepper’s back.

Spoilers for Spider-Man: Homecoming are below.

At the end of Homecoming, after Peter Parker has bested the Vulture and gotten back into Tony’s good graces, the founding Avenger asks Peter to come to the team’s upstate New York headquarters. Tony offers Peter an official place in the Avengers, complete with a new suit. Peter turns the offer down, deciding that he wants to stay a “friendly neighborhood Spider-Man” after all. Tony plays the whole thing off as a test, and Peter leaves.

That’s when Pepper bursts through the door asking Tony what they’re going to do about the horde of very real reporters he gathered for some sort of big announcement. Tony asks Happy if he’s still got that engagement ring, and it seems like he’s not joking as Happy pulls out a box. Pepper seems a little exasperated, especially at Happy announcing that he’s been carrying it around since 2008 (the year the first Iron Man came out) — but she’s not saying no. The two kiss and then run off to cause a well-needed distraction as the scene ends.

It’s a big deal because we haven’t seen Pepper since Iron Man 3. She didn’t appear in Avengers: Age of Ultron, but in that movie, Tony explained that she was just off running Stark Industries, and then he got into an argument with Thor about which girlfriend, Pepper or Jane Foster, was more impressive. In Captain America: Civil War, though, we learn that Pepper and Tony are on a break, and Tony doesn’t seem happy about it. Since it’s essentially been confirmed that Natalie Portman’s Jane won’t be returning to the MCU, you’d be forgiven for thinking that Pepper might suffer the same fate. From a business perspective, it makes a sad amount of sense. Paltrow’s busy, and hiring her for small appearances still costs money.

Luckily, she came back, and Pepper and Tony made up in Homecoming. In past media appearances, Paltrow has said she was cutting back the amount of acting she’d been doing to focus on her (scientifically dubious) lifestyle company, Goop. “We took some investment last year so as soon as we had other people’s money, I realized I really better focus on this completely,” Paltrow explained during an appearance on the Today Show in March of last year.

It’s unclear if Paltrow’s Pepper will make further MCU appearances, though it would make sense for her to pop up in Infinity War since she and Tony appear to be gettin’ hitched.

Spider-Man: Homecoming is now in theaters.