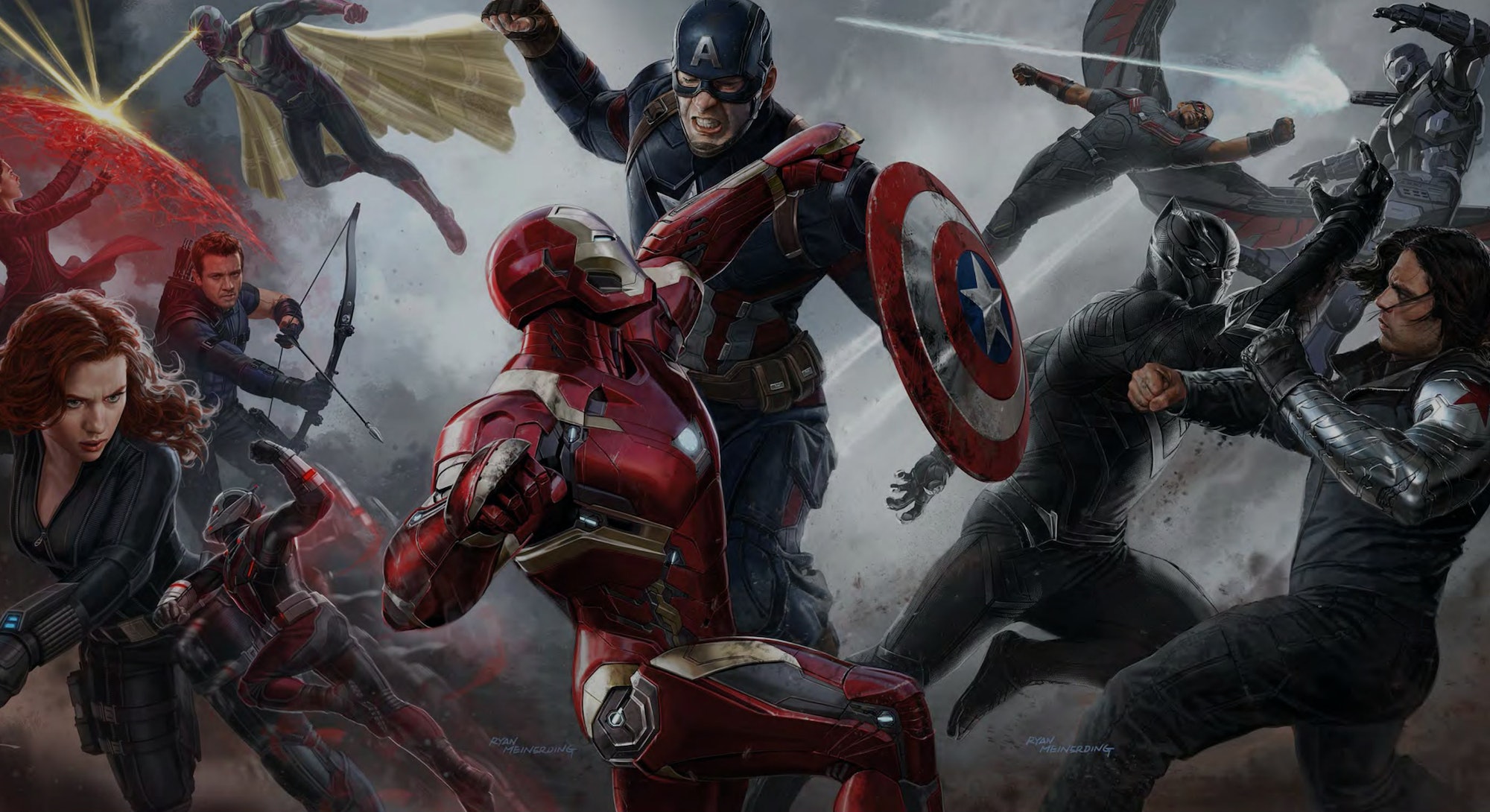 If you thought Captain America: Civil War had an abnormally high number of characters and plot threads, then you’re probably either a reasonable person, a non-comic book fan, or, my fiancée.

For seemingly everyone else, like this glowing review in The Atlantic, the latest entry from the Marvel Cinematic Universe “…achieved an uncommon balance of plot and action, humor and drama…” While I mostly agree that Captain America: Civil War is good-ish, I feel like its watchablity is a minor miracle. If you hadn’t seen all the previous Marvel films, you were probably confused as to why any of these characters were doing, well, anything. And even if you were up-to-date on every single shred of MCU lore, including Jessica Jones and Agent Carter, it might have been hard to pick a favorite scene. My fiancée loved everything concerning Ant-Man, who she referred to as “Tic Tac.” (If you didn’t see Ant-Man how would you know you were supposed to call him “Ant-Man?”)

Instead, this movie feels like you’ve stumbled into it halfway through, a feeling which pervades throughout. This can partially be blamed on tonal inconsistency; one second everything is slapstick comedy, next it’s murdery-family drama, but wait, it’s kind of a politically motivated Jason Bourne thing, too! This isn’t to say different types of tones can’t play well in “popcorn” movies, but I’d argue the over-adherence to complicated interconnected continuity is actually having an adverse effect of caring about what happens to the characters within the individual adventure you happen to be watching.

The reason why the continuity stuff in the MCU is backfiring is because it takes itself too seriously. When Tony Stark pops into Peter Parker/Spider-Man’s bedroom in Civil War, we’re just supposed to believe that this version of Spider-Man has been hanging out in Queens for a minute. Similarly, because Gwyneth Paltrow couldn’t do the movie, we’re told Pepper Potts and Tony are having relationship problems. Notice, none of this character development is earned. Instead, because everything has to fit together in a larger continuity, we’re just told things are true, rather than experiencing them in real time. Calling attention to a character’s absence – whether it’s Spider-Man or Pepper Potts actually just makes us focus on that sloppiness more, not less.

A slicker way to write the movie? Don’t mention Pepper Potts at all and don’t even show a scene where Tony Stark recruits Spider-Man. In fact, don’t recast Spider-Man, just use Andrew Garfield. Seriously, if this version of Spider-Man had just been Andrew Garfield in the new (old) Spidey suit, for most people, it would have been fine. I know that assertion might make certain kinds of fans furious, but the perceived need to explain the existence of this new Spider-Man is just as clunky as coming up with lame reasons why Pepper Potts is gone. It’s over-written, over-explained, which actually makes it a little bit less believable, even though it’s supposed to be more consistent.

Over 100 years ago, Sir Arthur Conan Doyle proved you don’t need to have consistent continuity in order to create awesome pop-narratives. In fact, the creator of Sherlock Holmes aggressively didn’t give a shit about continuity, so much so that certain biographical details in each Sherlock Holmes adventure occasionally don’t add up: John Watson was married a few times, but were both his wives named Mary? Was Watson’s war wound in his arm or his leg? Wait, did the evil Professor Moriarty die or what? All of these inconsistencies didn’t hurt Sherlock Holmes fandom one bit.

Quite the opposite: the continuity problems of the Holmes stories straight-up created the fandom. Instead of nitpicking all the errors, early Sherlock Holmes fans decided to concoct their own explanation as to why certain things didn’t add up: clearly Sherlock Holmes and Dr. Watson were real, and the stories are just one version of their real adventures, modified for public consumption. This creative spin (often called “the great game”) has informed literally all of Sherlock Holmes fandom, and is arguably one of the biggest reasons why the characters of that particular fictional universe have endured. If Conan Doyle had been trying to create a consistent canon in the style of the MCU (or Lucasfilm’s Story Group) you might argue, Sherlock Holmes fandom would have never existed.

Still, at some point in the recent past, all this story-consistency stuff in the MCU seemed pretty awesome because it felt like big-budget movies were finally taking comic book movies seriously. Broadly, I’m not arguing that comic book movies (or Star Wars movies) should half-ass continuity. But it also feels like there’s a thinning line between fan service and creating a nifty shared-universe. If the number-one priority of making a comic-book movie is to make sure it matches up with other comic-book movies, you might be obscuring the real reason why people like these movies in the first place: characters. DC’s Geoff Johns recently pointed out that “characters” were the only thing that really mattered, “not plot or spectacle.” Obviously, a lot of fans would argue that this latest Captain America film focused on completing the story of Bucky and Steve Rogers, proving that this is, in fact, a character piece. But with all the other MCU continuity Tetris pieces floating around (like Spider-Man) how could the average person - who missed the other films - even notice?

Captain America: Civil War was watchable because of most of its characters were charmingly drawn both in its own script and in the preceding MCU installments. But the greatest enemy of the Avengers wasn’t their ideological differences, rise of the Winter Soldiers, or fanatically obsessed civilians. Instead, their own canon was looming over them the entire time, threatening to prevent them from doing anything remotely interesting or unexpected. Because when the next installment of the story has already been decided, the characters tend to act jerkily, and unrealistically, like puppets.