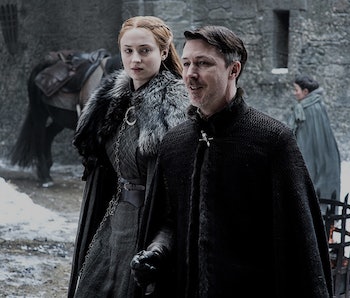 Petyr Baelish, aka Littlefinger, has spent several seasons of Game of Thrones grooming Sansa Stark in his own scheming image — but in Season 7, he might regret it. New photos from the upcoming season suggest tension between Baelish and his would-be Queen.

In Seasons 4 and 5, Littlefinger was Sansa’s only friend. He spirited her away from King’s Landing, saved her from her unbalanced Aunt Lysa’s wrath, and returned her to Winterfell. Unfortunately, Baelish either didn’t know or didn’t care that returning her to the Bolton-controlled Winterfell involved setting her up for rape and torture at the hands of Ramsay Bolton. In Season 6, Sansa took him to task for this glaring oversight and used him to help Jon Snow beat Ramsay Bolton’s army.

By the end of the season, when Jon Snow was crowned King in the North, Baelish made his intentions clear to Sansa: He wants to sit on the Iron Throne with Sansa as his Queen.

While Sansa didn’t greet the idea with enthusiasm, she also didn’t shoot it down. As the Northern houses hailed Jon at the end of Season 6, Sansa exchanged a complicated glance with Littlefinger. Despite his constant creepin’ on her, Sansa wasn’t ready to get rid of her powerful ally quite yet.

But a new photo from Season 7 suggests that she might be souring towards her slippery-accented mentor.

Based on previously released photos, they’re likely in the courtyard of Winterfell to see Jon off as he travels North of the Wall.