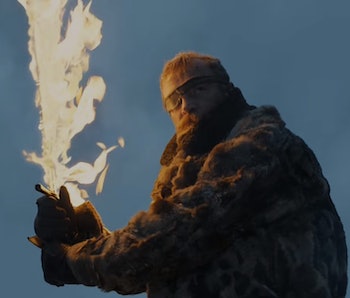 The new trailer for Game of Thrones Season 7 features a badass shot of a dude with an eyepatch wielding a flaming sword. A closer watch of the trailer reveals that this same man with a blazing weapon also appears later, standing by Jon Snow’s side. This imagery isn’t just meant to look cool — it’s essential to the story.

The dude in question is Beric Dondarrion, the original poster child for resurrection via Red Priest. He did it before Jon Snow made it cool, back in Season 3. He briefly appeared again at the end of Season 6, when Sandor Clegane joined forces with Beric and Thoros of Myr, his co-leader of the Brotherhood Without Banners. Clearly, they’ll encounter Jon in the far North in Season 7.

But why is the flaming sword important? It’s a key ingredient to the story of Azor Ahai, a legendary hero who is supposed to be reborn to save the world from darkness. Initial Season 7 photos of Sam and Gilly already made it clear that this story will play a key role in Season 7. They’re reading about Azor Ahai at the Citadel.

Many theorize that Jon Snow fits the profile for Azor Ahai reborn. And while the show has yet to confirm or deny it, the visual language of linking him with a flaming sword is no accident. That’s a big deal.

Below, Jon stands in the center next to Beric and his flaming sword.