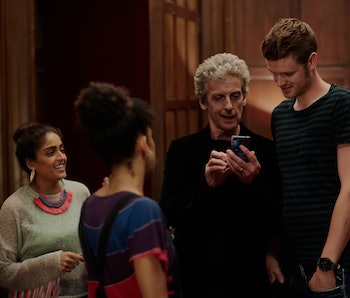 There’s no question that Doctor Who’s showrunner Steven Moffat has neglected ordinary people in recent years. In the place of real human drama has been cosmically large, hyper-convoluted events that change the universe forever — except when they don’t at all.

Hopefully, as Chris Chibnall takes over the TARDIS from Steven Moffat in Season 11, he’ll use a more down-to-Earth approach. That begins and ends with putting real, ordinary people back at the center of Doctor Who’s stories and making the consequences stick. (Remember when the 12th Doctor was permanently blinded … until he wasn’t anymore?)

Even when ordinary people have been central to Doctor Who stories, there’s a huge tendency for them to end up as some sort of space-god. From Rose Tyler to Bill Potts, the stories of regular people are often undermined by Doctor Who’s bad habit of removing character agency by granting a normal person sci-fi superpowers, and in Moffat’s era, he’s done it with little to no circumstances. Clara briefly “died” but was pulled out of time to become immortal and got her own TARDIS. The only fallout was the Doctor losing his memory of her. Which now seems to have been reversed, too.

Most recently, Bill Potts was killed, transformed into a cyberman, and then transformed again into the equivalent of a space puddle god in less than two full episodes. Seeing a pattern?

In earlier days of Doctor Who with Russell T. Davies at the helm, Moffat did a terrific job writing one-off episodes like “Blink” and “The Girl in the Fireplace” and show-altering two-parters like the “Silence in the Library” and “Forest of the Dead” combo. Each of these stories sidelined the Doctor to varying extents, instead opting to hone in on compelling new characters like the wistful Sally Sparrow, the brilliant Madame de Pompadour, or the then-new and enigmatic River Song. These stories are tight, focused on seemingly ordinary people doing extraordinary things, and not obsessed with the mythology of the Doctor or more cosmic events.

The exhausting Season 10 three-parter in which all-powerful monks take over the world, on the other hand, is everything that Moffat’s tenure has been: long, overly complicated, and when it’s eventually undone by a barely comprehensible plot twist, the world of Doctor Who and the viewer themselves just forget about it. Along the way, Popes and Bishops, major world leaders and diligent soldiers are dragged into the fray to then be unceremoniously vaporized. Nobody matters. The world and Doctor Who itself doesn’t really care. So why should we?

Doctor Who is often at its strongest when it’s firmly placed in small, personal stakes set in the present day. In all of Season 10, other than the compelling first episode, “The Pilot,” perhaps the best episode all season was “Knock Knock,” in which Bill rents a strange house with some other students her age.

The stakes are relatively small as cockroach-like Dryads consume Bill’s roommates, a creepy Landlord wields a tuning fork, and a wooden ghost of sorts is at the center of the mystery. It’s scary, compelling, and its drama is rooted in individual people rather than the fate of entire worlds or supermassive space ships.

Without the distraction of a complicated sci-fi setting or a different time period, Doctor Who usually thrives in portraying regular people on their own turf dealing with various aliens, friendly and otherwise.

It’s been a successful model for the show since the very beginning, and one that’s prominently on display in 2005 episode, “Father’s Day.”

In “Father’s Day,” Doctor Who shines a light on the importance of ordinary people as it focuses on a central character’s goals and feelings. It’s where the revived series during Christopher Eccleston’s run as the 9th Doctor really hit its stride, mainly because it hones in on companion Rose Tyler and the Doctor’s compassion for normal people.

Throughout “all of time and space,” the one time and place Rose Tyler chooses to visit is the day of her father Pete’s death when Rose herself was just a baby.

When Rose inevitably saves her father, the resulting paradox attracts the attention of the monstrous Reapers, which try to sterilize the wound in time by devouring everyone in the area — including the Doctor. Only by facing the death he was meant to have can Pete of all people fix what’s been done.

Everything hinges on this failed entrepreneur dying when he is supposed to. “There’s a man alive in the world who wasn’t alive before,” the Doctor explains to Rose. “An ordinary man: That’s the most important thing in creation. The whole world’s different because he’s alive!”

“Father’s Day” demonstrates the importance of one ordinary man over everything else, making Pete more important than even the Doctor.

As the Reapers close in on the remaining survivors, the Doctor brings them all inside an old church, where he meets the bride and groom to be and learns about the quaint way they met at 2 a.m. outside a club. They’re worried, overwhelmed, and feel like they don’t matter, but the Doctor reassures them: “Who said you’re not important? I’ve traveled to all sorts of places, done things you couldn’t even imagine, but you two: street corner, two in the morning, getting a taxi home? I’ve never had a life like that. Yes. I’ll try and save you.”

The Doctor caring about the little guy is the most important thing in Doctor Who.

In “Knock Knock,” Nardole says, “You don’t have to go to outer space to find monsters. There’s plenty of things that wanna kill you right here on Earth!”

Perhaps Chris Chibnall and the 13th Doctor should listen to that advice, and keep things a little closer to home so we can care about people in the present day.