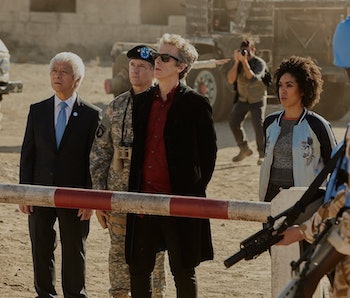 Peter Harness and Steven Moffat’s “The Pyramid at the End of the World” pits the Doctor (Peter Capaldi) and Bill Potts (Pearl Mackie) against the red-robed monks again, this time with a group of military leaders at their side in this week’s episode of Doctor Who.

Finally, Bill Potts has made a move that’s gotten the beautiful Penny to her flat in real life, not in a simulation — then the secretary general of the United Nations shows up with a host of soldiers. An impending skirmish between Russian, Chinese, and American forces over the miraculous appearance of a strange, 5,000-year-old pyramid requires the presence of the Doctor, who has been dubbed “President of Earth” during times of crisis.

These soldiers take Bill, somehow kidnap the TARDIS out of the Doctor’s office at the university, and put them both on a plane to the pyramid.

Upon arrival, the Doctor prompts Bill to figure out that it’s not really a pyramid but something disguised as a pyramid that’s strategically placed itself between the three largest powers on Earth. It’s looking to cause trouble and has one message for the President of Earth:

The Doctor approaches the pyramid, Nardole all the while giving him updates via a communicator because the Doctor is still blind and still hiding it from Bill and everyone else. A door opens up in the side of the pyramid when the Doctor arrives at the edge of it, and one of the red-robed monk creatures from the simulation walks out, promising that its people will take the Earth after “being invited” by them, whatever that means.

The creature disappears back into the pyramid, and, upon doing so, everyone’s phones and watches suddenly read “11:57 p.m.,” which the Doctor realizes is also, technically, “three minutes to midnight,” a take on Earth’s Doomsday Clock.

And it’s not a threat, as those are too easy. It’s a warning.

“Somewhere, somehow, the end has begun.”

It seems the end is coming in the form of a duo of scientists, one who accidentally lost her glasses that morning and one who spent too much time out the night before and is exhausted. The male scientist of the duo makes a horrible mistake, accidentally adding too much of something to one of their experiments.

But, before anyone can see the outcome of that disaster, the audience is brought back to the Doctor. He gets the Russians, Chinese, and Americans together to talk about their problems and to avoid the onset of World War III, as one does. And much to Nardole and Bill’s surprise, the Doctor advocates violence against the pyramid on the parts of the three nations so they can show strength and unity.

At that moment, the clock moves one minute closer to midnight. Something is going horribly wrong.

Bill finally finds out that the Doctor is blind, and just as she’s about to discuss it with the Doctor, a beam of light appears from the top of the pyramid. The beam of light stops both an American plane from bombing the pyramid and a Russian submarine from shooting missiles at it.

The world and military leaders approach the pyramid, entering through the door at its base, even though the Doctor is aware that it’s probably a trap.

The group happens upon the Monks, who introduce them to a machine that consists of strings of possibilities, created from the many simulations the Monks have run over, possibly, centuries. The Monks offer to help stop the impending apocalypse but say they have to be asked.

“Those who hold power on this world must consent to our union,” the lead Monk tells the Doctor. “We must be wanted, we must be loved. To rule through fear is inefficient.”

As expected, the Doctor refuses them and whisks the group away to solve their own problems. The military leaders, after some coaxing, agree to lay down their weapons and work toward peace, but that doesn’t do anything for the Doomsday Clock, which is now at one minute to midnight. They realize that it must be something else, perhaps a bacteria or a plague — much like the plant-killing, aggressive bacteria the two scientists have just accidentally made in their lab. It gets free and kills one of them.

To figure out where the threat might be coming from, the Doctor puts all the “top secret intelligence documents in the world” online and available to search. But after combing the internet, the military leaders get impatient and decide it’s best to give the world up to the Monks so that they can live to “fight another day.” They leave to go back to the pyramid, but the Doctor makes a realization after they’ve left that he can “blind” the Monks right when he’s about to admit to Bill that he’s still blind.

The Doctor makes his way to the lab and figures out that the best way to stop the virus is to sterilize it by blowing up the lab. But the military leaders have been killed by the Monks for not having pure, loving intentions by giving up the Earth. They turn to Bill, who denies them at first until the Doctor can’t escape the lab because he’s blind — he can’t see the combination lock on the door to get out.

Bill consents to the Monks taking Earth because her consent is given out of love, and the Doctor gets his sight back after Bill asks for it.

But now the Doctor has to get the Earth back from the Monks.

Doctor Who Season 10 airs on BBC and BBC America on Saturdays at 9 p.m. Eastern.