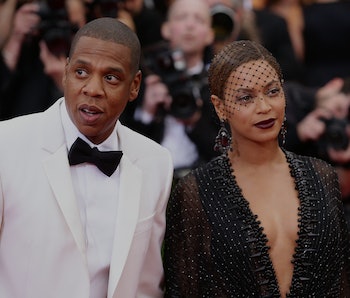 When Jay-Z dropped 4:44 on Friday the response was overwhelmingly positive.

While the headlines have recounted how the album is a public apology to Beyoncé and a humble response to Lemonade’s themes of infidelity and betrayal, critics and fans have been discussing how 4:44 goes deeper than simply that.

The tone of the album is beautiful summed up by this tweet:

Writing in The New Yorker, Doreen St. Félix recounts that from the very first track, there is a frankness to this album that may be new territory for the rapper.

Structurally, “Kill Jay Z” initiates absolution, representing a foundational admission of sin that allows him to chase redemption for the rest of this tightly conceptualized project. On “4:44,” it is almost startling how plainly he takes the blame for having spoiled something good. “I’ve seen the innocence leave your eyes,” he says on the title track, a frank apology to the woman he married and then cheated on.

Rolling Stone writer Brittany Spanos wrote a piece reflecting on the themes of black love, fame, and respectability politics that run through both Jay-Z and Beyoncé’s latest work:

So while Beyoncé gave Lemonade listeners a mystery to unfold by dropping lines about “Becky” – which many connected to the presence of designer and rumored Jay-Z mistress Rachel Roy on that fateful Met Gala night – and hinting at the level of betrayal she felt, she wrapped her personal story in a greater narrative of black womanhood. As many wondered how the world’s most powerful and respected female artist could feel so dismissed, she provided a thesis-level analysis of the ways black women have been forgotten and subdued.

Jay-Z maintains a similar strategy, candidly addressing the reality of his faults between searing takes and advice on how to be black in the business world. It’s the type of perspective that could only come from someone who has risen up in the face of a world that doesn’t want to see someone like him progress beyond the level of a stock character. It’s the same motivation he addresses in both the lyrics and video for “The Story of O.J.” where he plays upon the racist minstrel cartoons that were meant to further subjugate and indict the black community as lazy, among other still prevalent stereotypes.

A video for “The Story of O.J.” was released consecutively with the album Friday — but only on Tidal, the streaming service owned by Jay-Z.

As much as the album reflects intelligently on love and personal growth, an insightful review in Vulture by Craig Jenkins notes that Jay-Z admits to “being too enthralled by the cold calculations of his favorite mob movies to catch the cautionary bent.” Jenkins also reflects on the idea that album preaches using capitalism as a means to break free of oppression, an idealism that in 2017 might feel naive and outdated to younger listeners. Not everyone can be a millionaire.

“If painfully honest Jay-Z sounds petty on paper, know that the thrashing seems to come from a genuine desire for black unity and self-sufficiency. He wants to make more millionaires. He wants to funnel money back into local businesses. “God sent me to break the chain,” he says on “Smile.” Jay-Z really believes smart capitalism is the way to break out of the projects, and there’s a nobility to the sentiment. But drinking Diddy’s vodka and buying Jay’s streaming service aren’t what’s gonna get us free. Rallying behind one man isn’t the trick to prosperity. Someone always just kills the man. True mob movie aficionados know.”

Themes aside, the consensus is that Jay-Z is still the master of the craft, as illustrated by Kendrick Lamar in a tweet on Friday.

4:44 will likely be available for wider purchase next week.