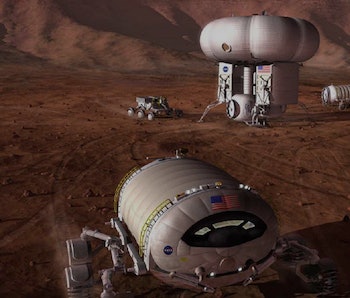 Having failed in proving the veracity of Pizzagate, conspiracy theorist and professional maniac Alex Jones has quickly found a new story to peddle forward to the unwitting masses: NASA is running a child slave colony on Mars.

Let’s get this out of the way first: All of this is wrong. “There are no humans on Mars,” NASA spokesperson Guy Webster told The Daily Beast. “There are active rovers on Mars. There was a rumor going around last week that there weren’t. There are. But there are no humans.”

Humans have never been to Mars. I can’t believe I even have to write this out right now.

On his radio show on Thursday, Jones brought on guest Robert David Steele — whose claim to fame is probably some dumb shit if he’s taking up an invite to talk to Jones — to explain his belief that NASA has kidnapped children to send them to space to work as slaves on a Martian colony.

“We actually believe that there is a colony on Mars that is populated by children who were kidnapped and sent into space on a 20-year ride,” said Steele, “so that once they get to Mars they have no alternative but to be slaves on the Mars colony.”

Jones, of course, stoked the flames of this hellaciously dumb-as-fuck idea. “Look,” he said, “I know that 90 percent of the NASA missions are secret, and I’ve been told by high level NASA engineers that you have no idea. There is so much stuff going on.”

Steele went on to add that the children weren’t just being used for slave labor, but they were also being raped and murdered.

“Pedophilia does not stop with sodomizing children,” said Steele. “It goes straight into terrorizing them to adrenalize their blood and then murdering them. It also includes murdering them so that they can have their bone marrow harvested, as well as body parts.”

This is so fucking wrong on so many levels, but it’s also completely unsurprising. Jones is a leading purveyor of conspiracy theories, and there is a gluttonous audience around the world eager to eat up the garbage and keep these bad ideas alive and kicking. Whether it’s Pizzagate, JFK’s assassination, or the notion that the Sandy Hook massacre never happened, people are drawn to conspiracy theories for largely the same reason people join clubs — they want to feel part of an exclusive group that is smarter and sharper than everyone else.

More like this
Science
4 hours ago
25 years ago, NASA landed its first rover on Mars — and catalyzed the search for life
By Doris Elín Urrutia
Science
7.3.2022 1:30 PM
NASA move could help the International Space Station stay in orbit without Russia
By Nancy Atkinson and Universe Today
Science
7.2.2022 10:00 AM
Astronomers discover a quirky star with a surprisingly galactic feature
By Nancy Atkinson and Universe Today
Related Tags
Share: