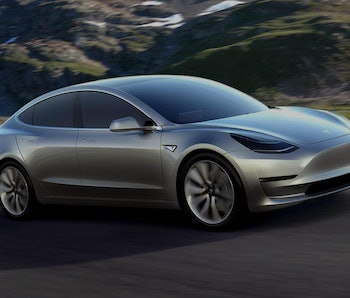 Elon Musk knows what the Tesla fans want. On the cusp of his company starting Model 3 production, the CEO took to Twitter on Friday to hint that some news about the upcoming entry-level sedan would be announced on Sunday. Business intelligence analyst Douglas Bailey made a Twitter post directed at Musk, asking him for more information about the car’s release date.

“Please have mercy,” Bailey said. “I don’t care if you say July 31st - but the speculation on Model 3 final release date has to stop.”

Musk has previously suggested that a final Model 3 reveal would come before deliveries start. Once the car enters production later this summer, delivery is expected to start soon after. As of April 2016, an estimated 400,000 people had placed a deposit to reserve their car, meaning the company has a large backlog to go through first. Model 3 annual production is expected to reach 250,000 by the end of 2018, and as the cheapest car in Tesla’s range by a wide margin, demand will be high.

Although there’s still a few details left to be revealed, we know a lot of the basics already. The car will start at $35,000, with a minimum range of 215 miles per charge. The battery will start at a size smaller than 60 kWh, thanks to efficiency savings through advanced air resistance technology. While the car will initially ship in a two-wheel drive configuration, an all-wheel drive model is expected next year. We also know, based on sightings of pre-release models, that the car will come in a variety of colors.

But we still don’t know how much the optional extras will set buyers back. We know that, owing to size restrictions, Tesla won’t offer the seven-seat option found on the Model S. We also know the car will skip some of the more advanced features like automatically extending door handles, meaning those options are likely off the cards.

Beyond these, though, we still don’t know how much other extras like advanced audio systems and premium seats will set buyers back. Other than a more definitive release date, reservation holders are going to want to know how much extra they’ll need to put aside to get the specced-out Model 3 of their dreams.

More like this
Innovation
4 hours ago
A single color is reason enough to buy a Jaguar XF
By Jordan Golson
Innovation
7.2.2022 6:00 PM
Are self-driving cars safe? The tipping point rests on a psychological illusion
By Jean-François Bonnefon and The Reader
Innovation
7.1.2022 10:00 AM
Robots are ready to get touchy-feely
By Sarah Wells
Related Tags
Share: