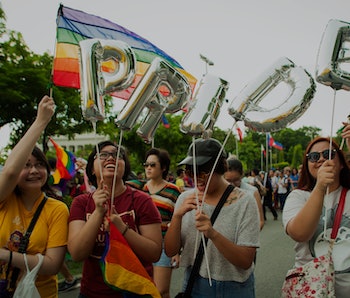 Thursday was the second-to-last day of Pride Month, an annual celebration of queer sexuality and the bravery it takes to be different in a violently heteronormative world. Unfortunately, a swath of Twitter users decided to term it #HeterosexualPrideDay and set that hashtag trending for most of the day.

A question follows: Was the hashtag started as a joke? Who on earth would have created it in sincerity?

The Twitter user “StraightPride” (@_JackN4Tweets), that’s who. This person takes credit for originating the idea and claims that it’s the second year in a row that they’ve instigated the hashtag and gotten it trending. Inverse reached out to @_JackN4Tweets for comment and received no reply.

It appears that this user has amassed at least enough followers to set the term trending, which sets off a backlash that keeps the hashtag elevated for the rest of the day: Even though almost all of the top tweets about #HeterosexualPrideDay are satirical or scathing critiques, those keep it trending along with the immense number of serious tweets.

@_JackN4Tweets has also turned the scheme into a money-making ploy with an online store of “Straight Pride” merchandise, including T-shirts and mugs.

“The war on heterosexuality is real as fuck,” @_JackN4Tweets posted on Wednesday night. “This is why this day is needed. Say it loud I’m straight and I’m proud!! #HeterosexualPrideDay”

So, no, #HeterosexualPrideDay is not a joke. It’s earnest as hell. But of course, it’s no better when these movements are started by trolls; encouraging the spread of hate speech is not funny, and a less-than-hateful intention on the part of instigators doesn’t negate the damage they cause.

Before it became a month-long event, Pride started as a protest march in 1969 in New York City; in November of that year, its organizers put together a mission statement of sorts: It would be an “annual reminder” to “encompass the ideas and ideals of the larger struggle in which we are engaged, that of our fundamental human rights.”

One Twitter user put it well: “When straight people are killed for being straight, denied the right to adopt, or have to live in fear, then #HeterosexualPrideDay can exist.”

As of 9 p.m. Eastern, the hashtag remained the top trend on Twitter.