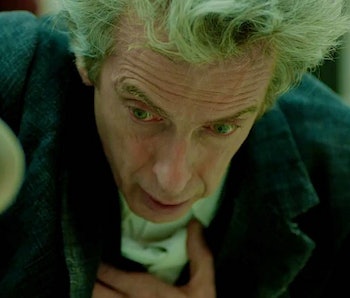 When Peter Capaldi’s 12th Doctor fell in the snow at the start of last week’s Doctor Who episode, “World Enough and Time,” he was starting a process that will ultimately take five months. That’ll be the longest regeneration of a Time Lord that the show has ever depicted in its 54-year history.

The trend with recent incarnations of the titular Time Lord has been for the Doctor to be mortally wounded in some fashion during a season finale or Christmas special so he could regenerate in the final moments of the episode into a new body. It’s typically a quick process, but now, it looks like Capaldi’s regeneration is bucking the trend that fans have come to expect.

The Doctor’s 13th regeneration that was teased in “World Enough and Time,” will officially start in this Saturday’s “The Doctor Falls,” and the Doctor will reportedly delay the full transformation until sometime during the Christmas Special later this year.

It wouldn’t be the first time that the Doctor finagled his way out of a premature regeneration. The 10th Doctor lost a hand during his very first adventure and much later, after getting shot by a Dalek in “The Stolen Earth,” healed himself with regeneration energy only to then channeled the rest of it into the hand, retaining his form. (This act of “vanity,” as the 11th Doctor would eventually call it, counted towards the limited 12 regenerations a Time Lord has, which explains why the 11th Doctor would have been the last if Clara hadn’t pleaded the Time Lords to grant him a new cycle.)

Those subversions of the Time Lord regeneration process only delayed the inevitable, but it looks like Peter Capaldi’s 12th Doctor will somehow be able to willfully subdue the process for what looks like one final adventure with the 1st Doctor. This coincides with Capaldi’s hints back in April that this next regeneration might not be what fans expect.

One thing we can expect? The 12th Doctor won’t linger like the 10th did for 20 minutes to say goodbye to old friends. He’s forgotten Clara entirely, and unless he’s somehow able to turn Cyberman Bill back into a human, Capaldi’s Doctor is out of companions.

We’ll know more about the 12th Doctor’s regeneration when “The Doctor Falls” airs on BBC and BBC America on Saturday, July 1 at 9 p.m. Eastern.