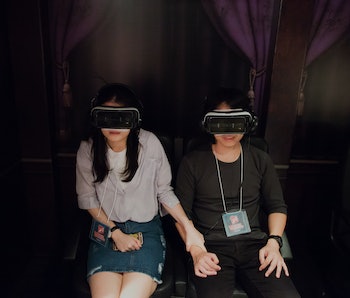 Neal Stephenson’s 1992 novel Snow Crash focused on what he called the Metaverse, a massive, collective virtual world shared by users around the globe, an internet you could enter through virtual reality. It captured the imaginations of readers around the world, including what was then a growing group of programmers and technologists who were working on building the first iteration of the world wide web. Now, 25 years later, one of the leading young programmers working back then thinks we are on the verge of finally realizing Stephenson’s once-lofty idea.

Tony Parisi has been championing VR for over two decades, having co-created the first universal language for authoring 3D applications on the web. Two decades later, he’s the head of virtual and augmented reality at Unity, whose gaming engine that powers most VR and AR applications. Parisi likes to quote Mark Twain’s line about the truth being “stranger than fiction” when talking about the development of the Metaverse, suggesting that the possibilities are greater than anything Stephenson could have imagined.

“Whose definition are you gonna go with?” he says. “There are a lot of definitions and a lot of visions for how all this can play out.”

On Wednesday, while speaking with Inverse ahead of The Art of VR event in New York, Parisi ticked through some of the ways the Metaverse is becoming a reality — including some ways he’s involved in its rapid development.

In a post to his blog last year, Parisi discussed how Second Life, the early virtual world game that launched in the mid-2000s, ultimately fell off because it was a closed, top-down system. It was a big world, but dedicated users reached an end point. Now, Second Life founder Philip Rosedale is back at it, combining the initial concept, VR, and a more open approach.

“High Fidelity, the successor to Second Life, is trying to learn the lessons they learned at Linden Lab and take them forward into doing some things a new way,” he said. “They’ve created an open stack so people can basically download the whole stack, run it off their machine. We’ll see if that helps in terms of the infrastructure being more open.”

High Fidelity is an open-source platform that allows users to create virtual reality environments that they can share with others; there are customizable avatars that allow people to jump between these worlds, which creates a Metaverse for people using the platform.

Parisi also pointed to Facebook, which is focusing on VR with its Spaces initiative. It is also avatar-based, and as he notes, allows people to integrate all of their media, including photos and videos. Because you can invite other people — up to three right now — to your space, that also counts as some expression of a Metaverse.

The startup Vicarious, for which Parisi acts as an adviser, allows people to integrate media in their Gear VR for others to see, in a more dynamic way.

“You create simple little interactive presentations from your 2D photos and videos, which can be 2D or 360, from all the media you already have,” he explained. “You use a simple authoring environment, and you can present that to somebody else, so they’re getting basically a slice of your life. So, that’s social, but it’s a synchronous — there’s no avatars in there.”

Parisi — whose Twitter own bio includes the label “Virtual Reality OG” — has long been involved in WebVR, and in some ways, that’s the most promising, given the big names involved. “You’ve got Google, Microsoft, Mozilla, Oculus, Samsung all working on web browser technology with WebVR,” he said. “You can have interconnected experiences and it’s just hyperlinked.”

Basically, WebVR will allow people to experience virtual reality through their web browser, so that it’s accessible to any VR device. It would make virtually any service with a VR experience accessible.

“Say you’re browsing around VR on Samsung internet and VR, where you’ve got tiles around you,” he said, laying out an example of how it will work. “Then when you tap on something you jump into an experience, and that can be hyperlinked to another experience.”

It sounds a whole lot like the internet as we know it now — which brings to mind his favorite quote for providing perspective on the development of the Metaverse.

“Vlad Vukićević, who now works at Unity, created WebGL and WebVR. He likes to ‘the Metaverse is the web, it just has a 2D interface,’” Parisi relayed. “We’re already glued to our phones, checking all our information when you’re on Facebook and you tap on someone’s post its all web data coming in through the Facebook app anyway.”