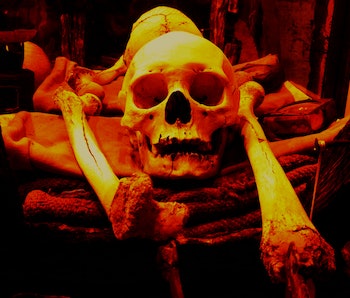 Heat kills. It slips through windows, walls, and open doors to sit with its victims. Their heartbeats pound in their heads. Sweat drips from their hot, dry skin. They lose their grip on reality, their powers of speech, and eventually, consciousness. And then they die. When coroners cut into those dead bodies, they find their organs swollen and damaged, and their brains squashed against the bones of their skulls.

It happens more often than you’d think. In the American Southwest, where temperatures have climbed so high this week that planes can’t take off, four died from the stifling weather, including one homeless man.

The human body has defenses against hot weather, but they’re not infallible. People clear heat in four ways: conduction, convection, evaporation, and radiation. Press your forehead against some frozen peas, and heat conducts away from your skin. Stand in a breeze, and heat convects into the atmosphere. Spill water across your skin, and your body will cool as it evaporates. And every second of the day, radiating waves of heat sluice from the human body into the surrounding universe.

But those defenses break down when there’s so much heat in the air that it invades the body faster than it can be cleared. Probe inside a person experiencing heatstroke, and you’ll likely find temperatures between 104 and 111 degrees, though readings as high as 116 aren’t unheard of. At that point, blood vessels constrict at the body’s periphery, causing the lips and skin to become dry and flaky. As organs swell, spontaneous cell death and kidney damage pose significant concerns. Muscles rapidly break down and weaken. The most serious danger, however, is the swelling central nervous system grinding against its bodily prison. Doctors warn that if a person suffering heatstroke doesn’t wake up quickly, they might not wake at all.

Conduction, convection, evaporation, and radiation are the final defenses against heat. But the primary defenses are health and wealth. If you’re in good shape, all your body’s systems are better prepared to handle heat. And wealth protects you from having to encounter it, really, in the first place.

For the relatively wealthy, air-conditioned set, punishing heat is less a killer than an inconvenience. Powerful and expensive air pumps run day and night, circulating it out of their homes, workplaces and cars, protecting them from death by overheating. That’s why the victims of heat stroke concentrate among the urban poor — the elderly, the very young, and outdoor laborers who often live in apartments without air conditioning. Sick people, people on medications, and people who drink alcohol are in particular danger. Some cities do hand out fans in hot weather, but when it’s as hot as it recently was in the Southwest, or very humid, simply blowing air around is far from sufficient.

Once heatstroke has been spotted — dark, nasty-smelling urine, pollutants in the blood, fainting, disorganized speech, and weakness are key signs, as the kidneys, nerves, and muscles break down — treatment is fairly simple: Move the patient out of the sunlight and into a cool room, and call 911. Strip off their clothes and continually mist their bodies with cool water. Pack their groins and armpits with ice. Fan warm air over their skin, forcing the misted water to evaporate further. Repeat, until the ambulance arrives.

Want to stop it from happening in the first place? Make it possible for everyone to access cool air and water on a hot day. Keep athletes and laborers out of the sun. And spread the word: Research suggests that early warnings of heat waves can help those most at risk prepare, and save themselves from the killer.