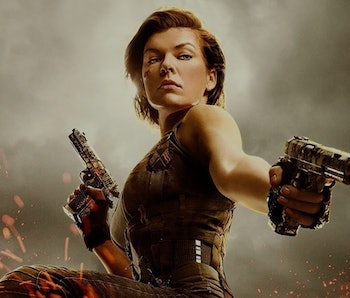 Never trust a critic who rejects all genre film outright — the superhero movies, the action flicks, the supernatural thrillers. Though action blockbusters aren’t friendly to the subtle tastes of most auteurs, it’s more difficult to please fans than most realize. Imagine being given the basic parameters of a story, and then being instructed to write something that will satisfy millions of genre fans who need a movie’s tonal notes to ring out just right. These movies, with their immediately recognizable dialogue — “we’ve got company!” or “Uh…guys? Little help?” or “I’m getting too old for this shit” — keep the masses happy, and that’s an endeavor that’s neither simple nor soulless.

That’s not to say Resident Evil or the deluge of Stephen King adaptations coming out this year exemplify art that will stand the test of time. However, there’s room in American media for movies which don’t aim to be venerated by critics or studied decades later by film theory students. The problem is, the space for loud, fast-food equivalent film is increasingly occupied by convoluted cinematic universes, even in horror. We’re less likely with each passing month to see movies like 30 Days of Night or Daywalkers because even pulpy horror favorites are being given soulless reboots, prequels no one asked for, or else they’re being sewn together like some — excuse the metaphor — Frankenstein’s monster of once-creepy tales.

Sony’s Resident Evil franchise, a great example of films beloved by a certain kind of moviegoer, has never received positive reviews from film critics, though moviegoers reportedly enjoyed the first two films. None of the Resident Evil movies tanked at the box office, perhaps because their budgets weren’t insane, and 2017’s The Final Chapter pushed the entire collection over the $1 billion mark. While the franchise won’t go down in history as a Star Wars or Harry Potter level cash cow, it pulled off a rare sequence of events in an over-saturated market: the story of a woman fighting an evil corporation and the horrors it unleashed on the world never expanded beyond that basic premise and yet the movies kept attracting new viewers. Similar to the Fast and the Furious films, we keep returning because we have a pretty good idea what we’re going to get when the lights go down.

Compare F8 of the Furious or Resident Evil: The Final Chapter, both given a shrug from critics, to Alien Covenant, which stretches so far into philosophical territory that it makes everything that was once subtle in Ridley Scott’s original film into a clunky statement about creationism. It’s not clear who supposedly watched the first four Alien films and then wanted a couple of talky prequels featuring neither Ripley nor xenomorphs, but that’s what Ridley Scott apparently believes.

Even Blumhouse Productions, famous for churning out low-budget horror hits, is retconning its once simple films into extended narratives. The Purge got a political face-lift in 2016 and has a TV show in development, Sinister and Insidious received unnecessary sequels, and Paranormal Activity has so many installments that it’s difficult to remember why the first film captured horror fans’ imaginations. Hint: it wasn’t the demon’s backstory.

Blumhouse is rare in that the company has released original one-shot films alongside its growing, forced franchises; the fact that those movies do well is evidence that there’s a needy sub-market among movie fans. The people satiated by Oujia, Creep, Hush, Unfriended and The Gift want to be shocked more than they want to be challenged by offbeat aesthetics or look for “easter eggs”. These are horror fans who don’t need their monsters to act as metaphors for social mores — though, in the case of Get Out or The Neon Demon or Starry Eyes, making that genuine connection can work well. Fans of bombastic action horror and thrillers don’t want to be told by out-of-touch critics that films like The Babadook, It Follows, and The Witch transcend the horror genre beyond the pile of trash that apparently comprises all other horror films. Well-written horror that feels complex and inventive isn’t new, and to say otherwise is tone-deaf.

Sometimes, a progressive horror film like You’re Next hits that sweet spot between a pure thriller and relevant social commentary. But other nights, you just want to turn your brain off and watch Milla Jovovich kill an undead mutant dog. As long as the films aren’t doing active damage like Eli Roth’s xenophobic Green Inferno, there’s nothing wrong with appreciating a gory slash fest for what it is: funny, exciting, and ultimately temporary.

See also: a full oral history of Resident Evil, told by the cast and crew