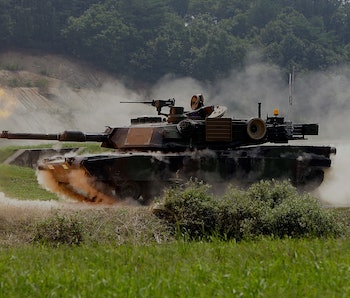 The U.S. Army loves tanks, but its current stable of giant, rolling guns is getting old. The government’s concern, as it has been since 1946, is that the Russians (or another superpower) will eventually have America outgunned, and a new bill by the House Armed Services Committee could help the Army rekindle the sweet flames of Cold War-era innovation.

This week, the House Armed Services Committee released the first draft of its 2018 defense policy, which includes recommendations for how Congress should spend its military budget. It’s is a pretty direct call to step up progress on two projects, a next generation main battle tank and a new light armored vehicle called the Mobile Protected Firepower vehicle.

The bill explicitly states that Congress is worried about the U.S. being outgunned on a modern battlefield if it were to fight another tank-equipped superpower (something that would almost certainly start World War III).

The Vice Chief of Staff of the Army stated, in testimony before the House Committee on Armed Services, that today’s Army is “out-ranged, outgunned, and outdated; and on our present course, the U.S. Army will not be sufficiently modern to deter and defeat potential enemies.” The committee is concerned that the tactical overmatch that U.S. ground forces have enjoyed for decades is being diminished, or in some cases, no longer exists.

The United States has run up against enemy tanks in the early stages of both Iraq wars, but an uneven fight where the America’s military had command of the air (planes beat tanks in the big rock-paper-scissors of combat, generally) isn’t really a good test of its tank capabilities the way that a land war with Russia would be.

In such a fight, Congress is worried that the current vehicles, like the M1 Abrams MBT — there’s approximately 9,000 of them at $5 million a tank — won’t quite cut it. The M1 has been in service since 1980, and until now the military’s policy has been to keep slapping upgrades and new technology on the same platform, basically across the board. In the future, though, it’ll be much easier to incorporate new technology on a platform specifically designed for it, and the military will need an entirely new main battle tank in the future.

As Breaking Defense reports, the Army already had plans for a successor to the Abrams, first in the “Ground Combat Vehicle” program (which it ended in 2013), and currently with the Next Generation Combat Vehicle program, which wants to have a new design for a heavy vehicle that acts as a mothership for packs of drones and unmanned ground vehicles. But the HASC’s message is clear: hurry up.

In addition to a general successor to the MBT, Congress wants to see progress and funding go toward the Mobile Protected Firepower project. The MPF would be a light armored vehicle not intended to play on the same level as a main battle tank, but capable of giving infantry battalions some more firepower in other engagements, like against the older-model Russian tanks sometimes fielded by the Islamic State and other terrorist groups, or in a dense urban environment where the Abrams can’t maneuver well.

The Russians have the BMP-2, a light tracked vehicle used as an armored personnel carrier to get soldiers from point a to point be with enough bang-power to engage medium threats. The U.S. Army essentially wants a bigger, badder version of this, small enough to roll around narrow city streets but with a big enough gun to engage a main tank. The Army only recently started re-deploying heavy armor to European posts as a deterrent to Russia — before that, the only units there were light armor and infantry. A new MPF would make the latter forces even stronger in a pinch, though they’d still need help from the heavy brigades in a pitched battle.

If the bill gets through Congress, the government is setting a pretty aggressive schedule, and the military hasn’t had a lot of luck with new platforms lately. The F-35 fighter program, billed as a similar overhaul to the F-16/ F-18 as the new next-gen tank would be to the Abrams, became a budget-crushing, bloated, buggy mess. Let’s hope for the national budget’s sake a new tank doesn’t go the same way.

More like this
Innovation
5.20.2022 11:00 AM
China and Russia are on track to set up a Moon base by 2036 — here’s the plan
By Allie Hutchison
Innovation
17 hours ago
Chevrolet Silverado ZR2 2022 review: Price, specs, interior, and one glorious feature
By Jordan Golson
Innovation
5.24.2022 1:33 PM
50 years ago, the U.S. and U.S.S.R. joined forces to ensure astronauts could survive in space
By Allie Hutchison
Related Tags
Share: