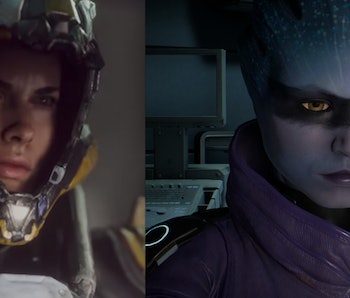 One of the biggest announcements to come out of E3 2017 was Anthem, BioWare’s newest MMO-infused sci-fi action franchise. The rumored Destiny-killer looks pretty damn cool, as early footage reveals that it’ll let players fly around like Iron Man in an open world as they fight monsters in lush environments. Early buzz seems to view Anthem as a fusion between Mass Effect and online shooters like Destiny or The Division — a new combination that gamers haven’t really seen before.

But, Anthem is leaving a lot of fans disgruntled when it comes to BioWare’s other recent game: the fourth entry in the Mass Effect franchise, Andromeda. While the two sci-fi adventures should have little to do with one another, a lot of fans are assuming that they partially have Anthem to blame for the let-down that was Andromeda. And, they’re not entirely wrong.

Anthem siphoned away BioWare’s resources to seemingly become the innovative, open-world adventure that gamers wanted from Andromeda. A lot of early reactions to Anthem — even from BioWare’s more diehard fans — were tinged with frustration about what the new game meant for Mass Effect, which now seems, to many, like a dying franchise.

Especially in light of a June 7 in-depth exposé by Kotaku’s Jason Schreier, it’s clear that Andromeda’s troubled development was tied to the very foundation of Anthem.

By 2012, a certain portion of BioWare’s resources was partitioned off for what was then referred to as “Project Dylan” (Anthem), which was developed at BioWare’s main headquarters in Edmonton, Canada. Andromeda was assigned to a secondary studio in Montreal.

Initial aspirations were for Andromeda to be exploration focused, with procedural generations of many planets — much like what No Man’s Sky attempted. But, working with the Frostbite engine that powered the earlier games proved impossible for a vision of that scope. Eventually, after many personnel changes and the shuffling around of departments, the bulk of Andromeda came together “from the end of 2015 to March 2017.” It was whittled down to a handful of explorable planets with janky character animations and a confusing story that felt derivative.

Anthem, on the other hand, looks epic and polished.

It’s easy for anyone to watch the Anthem gameplay demo, revealed at E3 2017, and think the combat is deeply reminiscent of virtually any Mass Effect entry. (For what it’s worth, most third-person sci-fi shooter combat looks the same — unless it’s Gears of War and you’re sawing people in half.) But the in-combat UI and controls are nearly identical between the two games.

From the looks of it, Anthem players will be able to deploy different selected abilities using the left and right bumpers, respectively, with a third assigned to the combined press of the two. Even the ground slam move used by the teammate in the heavier Javelin exo-suit is deeply reminiscent of Mass Effect’s Nova biotic ability. Compare all this to combat from Andromeda, which has the same perspective and UI.

While Mass Effect: Andromeda did introduce a jetpack into the mix for more mobility, when it came to combat, this innovation felt too slight for the franchise. It was too little too late in an era where fans wanted more.

By comparison, Anthem literally allows players to fly around just like Iron Man.

Though little is known about the plot of Anthem, what has been revealed looks promising. Players utilize exo-suits, called Javelins, that offer various perks and abilities, flying and fighting solo, or teaming up with up to three squad mates. They explore the dangerous wilderness as Freelancers and protect civilization.

If the gameplay reveal is any indication, then Anthem will offer the kind of exploration-focused open world that fans wanted from Mass Effect: Andromeda rather than a rehashing of older Mass Effect characters and tropes in a new galaxy that felt very much the same.