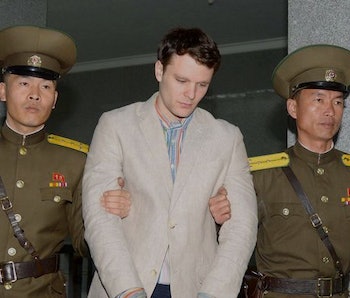 Young Pioneer Tours, the company 22-year-old Otto Warmbier used to travel the North Korea, will no longer take American citizens to North Korea. The announcement, posted after 6 a.m. Eastern on Tuesday, comes soon after Warmbier was pronounced dead Monday afternoon by his family, having returned to the U.S. after spending 17 months detained by authorities in Pyongyang.

“Our deepest sympathies are with Otto Warmbier and those who loved him,” Young Pioneer Tours writes in a statement posted to its website. “The devastating loss of Otto Warmbier’s life has led us to reconsider our position on accepting American tourists. There had not been any previous detainment in North Korea that has ended with such tragic finality and we have been struggling to process the result. Now, the assessment of risk for Americans visiting North Korea has become too high.”

Warmbier had been arrested in January 2016, accused of trying to steal a propaganda poster from the hotel where he was spending his five-day trip. The University of Virginia student was sentenced to 15 of hard labor, but was released last week after pressure from Americans and the international community. By that point he had been in a coma for more than a year.

Warmbier returned to his hometown of Cincinnati, Ohio with severe brain damage incurred during his imprisonment. North Korea said Warmbier had contracted botulism and fell into a coma after ingestion a sleeping pill, but American doctors did not find evidence of any such illness. He was in a vegetative state upon his arrival back to the United States. Warmbier’s parents released a statement after his death on Monday.

When Otto returned to Cincinnati late on June 13th he was unable to speak, unable to see and unable to react to verbal commands. He looked very uncomfortable — almost anguished. Although we would never hear his voice again, within a day the countenance of his face changed — he was at peace. He was home and we believe he could sense that.

Doctors had found signs his condition was caused by cardiopulmonary arrest.

“We had held onto hope that he might recover, and have the life that he should have had, but now those hopes are gone, and we too are reeling with the shock of a young man’s life taken well before his time,” Young Pioneer Tours wrote.

“The way his detention was handled was appalling, and a tragedy like this must never be repeated. Despite constant requests, we were denied any opportunity to meet him or anyone in contact with him in Pyongyang, only receiving assurances that he was fine. There has still been almost no information disclosed about his period in detention. Considering these facts and this tragic outcome we will no longer be organizing tours for US citizens to North Korea.”

Warmbier’s father Fred Warmbier, accused the tour company of luring his son into traveling to North Korea, and said the company helped his son become “fodder” for the isolated regime.

Young Pioneer Tours, for its part, will not end student tours to North Korea for citizens of other countries. The China-based company’s FAQ page about North Korea was recently updated. In response to a question about how safe North Korea is, the answer used to read:

“Extremely Safe! Despite what you may hear, North Korea is probably one of the safest places on Earth to visit.”

The passage is now three paragraphs long, beginning with:

“Despite what you may hear, for most nationalities, North Korea is probably one of the safest places on Earth to visit provided you follow the laws as provided by our documentation and pre-tour briefings.”

Three other Americans remain in North Korean custody to this day.