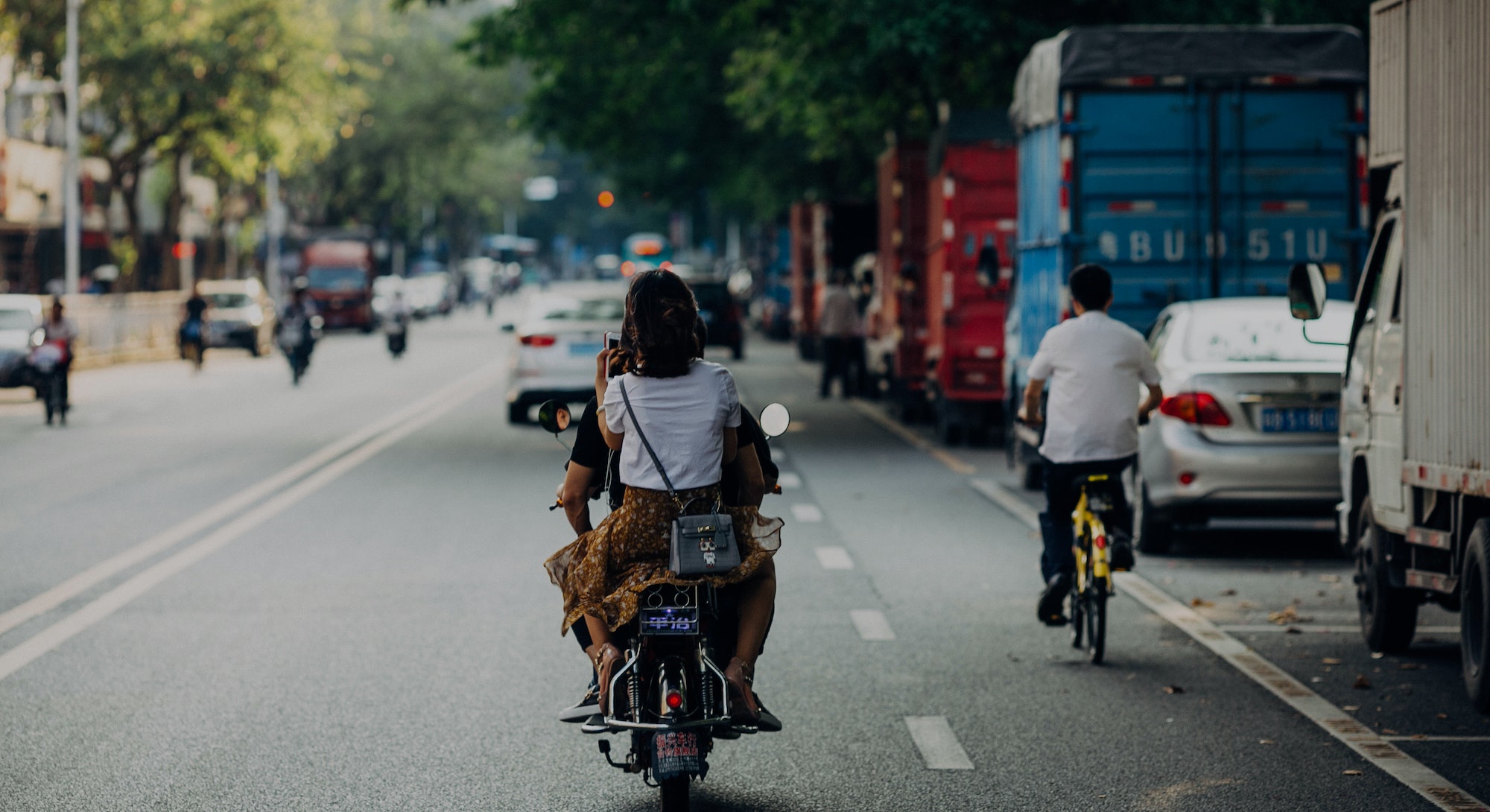 When the historian and documentary filmmaker Michael Woods landed in China in 2013, he was astonished at what he was seeing. He was last there in the 1980s, during a trip that took him from the massive country’s gigantic cities to its outermost fringes, and though the capitalist reforms had been taking China into the future for quite some time, Woods was still shocked at the new Shanghai.

“I went into the city and thought, I’ll get myself a coffee. And I remember texting my younger daughter who was in her mid-20s,” Woods recalled in a recent interview with Inverse. “I said, ‘You’re not going to believe this. I am in the middle of Shanghai, and I am sitting in a Starbucks with a latte and John Coltrane playing on the sound system.’ That’s China.”

So much has changed in China, but that’s nothing new. The country was first unified in the third century BC, and as Woods lays out in his new six-part documentary, The Story of Chin, it has been both a center of enlightenment and tradition. The recent surge that has turned the country into the world’s second-largest economy is, as many Chinese see it, simply a return to the natural order of things.

But it’s hard for many westerners to view it that way. A century ago, western powers divvied up and exploited a China that was both militarily and technologically overmatched, and through the ‘70s, it was largely an insular nation. That makes it disconcerting for some to watch China’s re-emergence as an industrial and technological powerhouse that’s home to 1.3 billion citizens — and not-infrequent human rights violations. Its presence even in America is unmistakable now: China owns much of the country’s debt, its largest movie theater chain, as well as hotels and a growing number of major companies; meanwhile, Mandarin is appearing more frequently in advertisements and city signs.

With that in mind, Inverse asked Woods, whose documentary series began airing on PBS on Tuesday night, to break down what Americans need to know about China, a country that looms so large and yet for many, is still steeped in shadow.

How the Government Actually Works

“What I’ve noticed here in the United States and in the UK is that everybody still talks about China as a communist state,” Woods says. “And I think one of the things people need to understand is, China today is ruled by the Communist Party. They are the party that won the independence struggle, in 1949.”

After helping the allies win World War II, China landed in a civil war between the nationalists, led by Chiang Kai-shek, and the communists, led by Mao Zedong. Obviously, the Communist Party won, and they established the People’s Republic of China. Technically, there are several other political parties in the country, but they have zero influence.

“They have an authoritarian tradition,” Woods says. “The economic system is not communist, it is market capitalism, and so what you’ve got is this weird hybrid I would almost call Confucian or Leninist Capitalism. Americans often think that they are a bunch of commies, but it’s not like that.”

Democracy Isn’t on the Horizon

Whether representative democracy could work in China, with its massive and far-flung population, has been debated for over a century. For decades, under Mao’s rule, dissent was crushed, making it a moot point. In part thanks to the capitalist marketization of its economy, a massive improvement in living conditions has seen more than 800 million Chinese lifted from poverty since 1978, and the Communist Party has been able to hold on to power.

Controlling a massive military is crucial, but there is also a lack of overwhelming public demand.

“It still has a lot of credit in the bank because of the liberation struggle after the Japanese war,” Woods explains. “It’s not like the communist parties were in a lot of those Eastern European states, where they were just a bunch of shysters. There’s no doubt there’s a lot of corruption and crony capitalism, but there’s a lot of loyalty to the feeling they’ve delivered over the past 30 years.”

Obviously, at least some of that loyalty can be chalked up to misinformation; when a country controls the flow of news and opinion, it creates an artificial consensus based on lies.

There’s a Clampdown on Speech

“A friend of mine was teaching in Hong Kong, and they had some mainland students there, and he teaches a modern Chinese history course,” Woods says. “He did a lecture about post-1979 up to Tiananmen Square, and the mainland Chinese students came up afterwards saying, ‘How do you know this? This must be Western propaganda, this cannot happen.’”

For a time, the Chinese government was willing to accept that Chairman Mao went off-the-rails during the Cultural Revolution, a decade-long persecution of politicians and citizens that began in 1966. It’s estimated that about one million people died, and the Chinese government in 1981 officially acknowledged the catastrophe. But the issue is mostly taboo in China now, and speaking about the brutal response to the Tiananmen Square protests in 1989 is strictly verboten.

China has long had restrictions on speech and the internet, and they’ve only tightened under President Xi Jinping, who took office in 2012. A memo called The Current Situation of the Ideological Front was released in 2013 with directives meant to suppress anything considered threatening to the government.

“There are seven things which journalists totally cannot talk about in the Chinese newspapers and internet,” Woods explains. “They are: civil rights, universal values, freedom of speech, crony capitalism, the historical errors of the communist party, civil society, separation of the judiciary from the executive.”

Xi has clamped down even further in the subsequent years, with bans on most western social media platforms and tight monitoring of the internet.

“What they’re pushing now is the idea that, ‘We do it the Chinese way,’” Woods says. “And they are specifically rebutting the idea that they could develop some form of Western democracy.”

Some Political Reform Is Happening

On the flip side, China isn’t an entirely repressive regime; the upgrades in quality of life, and market-driven economics, have liberalized the country in many ways. While the single-party system doesn’t seem like it’s going to change any time soon, the communists have slowly made reforms to address quality of life, even if civil rights have been curtailed.

“The Communist Party’s main objective is to remain in power, but they can only achieve that through growth and keeping the people happy,” Woods says. “And there are issues. The environment. Pollution. The food chain, the problems with that are massive. There’s a lot of unease in the Chinese people about crony capitalism and enriching of the leadership.”

China’s environmental issues — including its horrible smog problem — are well-documented, as that it’s staying committed to the Paris Accord.

Less sexy, but still domestically important, is the battle over land-ownership rights. Though the economy has become mostly capitalist, it maintains vestiges that are beneficial to the autocratic state.

“You can only lease something for 70 years, because technically, the state owns everything,” Woods says. “And people are now fighting in the courts to try to get back their hereditary property. And people hate the idea that you can lease something for a long period but if some local party boss wants to build a supermarket or drive development through, they can purchase your land and your compensation is miserable.”

Last fall, China announced some reforms to these laws, though undoubtedly, more change will be needed.

Chinese citizens are also very concerned with the crony capitalism that has both powered and plagued the 30-year growth period. Corruption has minted billionaires but also helped perpetuate massive inequality in China, and so even though quality of life has improved, working class citizens have grown to resent the imbalance.

In response, the government has been cracking down on both government officials who traded influence for financial gain, as well as the businessmen who offered that cash. But they’ve done so in an often brutal way; in 2014 alone, the government says it gave “light punishment” to 200,000 allegedly corrupt officials, while 80,000 more got more severe sentences.

More high-profile are the litany of billionaires who have disappeared in the middle of the night, only to show up months later after “cooperating” with government probes.

There have been increased tensions between the US and China since the election of Donald Trump, who took a hard line against the country during his campaign. Trump accused China of currency manipulation and fleecing the United States in trade deals, though that’s largely fallen by the wayside. (Trump welcomed Xi to Mar-a-Lago in April and dropped the currency manipulation accusation. On Tuesday, Trump tried to make nice with China even after talks about North Korea apparently broke down.

But Trump’s advisers, including Steve Bannon and Secretary of State Rex Tillerson, have continued the tough talk, suggesting that there will one day be a war between the world’s two superpowers. At issue is China’s seizure of the disputed islands of the South China Sea, especially because it is using them for military installations.

Woods, at least, thinks things will work out.

“I think we’re all a bit scared at the moment because the Chinese government is not only authoritarian and clamping down, but it’s doing things like in the South China Sea that are edging toward confrontation,” Woods says. “But they are run by the technocrats of the younger generation, some of whom are Western educated, who are very, very smart. In my view it would incredibly unlikely that they in their calculations of politics, international politics, that they would make the error of putting themselves in a position of military confrontation.”