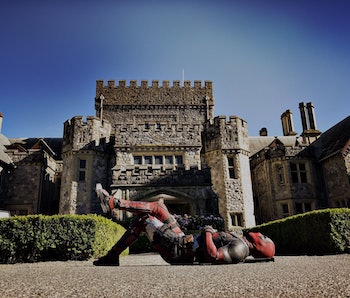 Everyone’s favorite Merc with a Mouth is either working hard or hardly working on Deadpool 2. Over the weekend, actor Ryan Reynolds tweeted a fun image of Deadpool — presumably with Reynolds himself in the costume — lying on the ground of the Parkwood Estate, the actual filming location of the X-Mansion from the X-Men movies. Although, it’s unknown if the picture is an old photo from the set of the first Deadpool or if it was taken during filming of Deadpool 2. One thing is for sure, though: Deadpool is a lazy SOB.

On Saturday, June 17, Reynolds shared the photo of Deadpool lying down at the X-Mansion with a tweet that reads: “Dropped by the X-Mansion. Big fucking surprise. No one’s home.”

Deadpool’s potty mouth is funny enough, but what’s extra funny is that the tweet recalls the popular self-own from the first Deadpool, where Wade Wilson takes a jab at his own movie’s tiny production budget. Towards the third act of Deadpool, Wade Wilson drops by the X-Mansion and is greeted by Negasonic Teenage Warhead (Brianna Hildebrand). The heavily CGI’d Colossus (Stefan Kapičić) is offscreen, and the general emptiness of the mansion — which should be populated by mutant teenagers and adult staff — caused Wade to joke: “It’s funny that I only ever see two of you. It’s almost like the studio couldn’t afford another X-Man.”

Unlike most other superhero movies from major studios, Deadpool had a modest budget of just $58 million. The success of the film will likely bolster the sequel’s budget, but the franchise seems like it will remain true to its thrifty roots. David Leitch, who previously directed John Wick, is on board for Deadpool 2, to which Reynolds told Entertainment Weekly: “[Leitch] can make a movie on an ultra tight minimal budget look like it was shot for 10-15 times what it cost.”