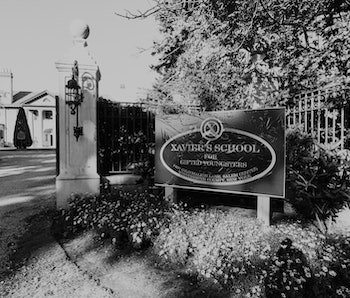 Drive northeast from Toronto along Lake Ontario for an hour, and you’ll land in working-class Oshawa, home to the lavish Parkwood Estate. A mansion and local historical landmark, the estate rotates its weekends between wedding receptions and Hollywood movie shoots. On this weekend in mid-September, Parkwood was made up into Xavier’s School for Gifted Youngsters, the boarding school where Marvel’s mutants learn to harness their powers in peace.

Inverse was one of several media outlets invited to the X-Mansion come to life, as a promotional event for the Blu-ray release of X-Men: Apocalypse. The estate itself is a relic of old wealth preserved by Oshawa, a once-booming motor town in the midst of an economic comeback. The mansion, owned by General Motors Canada’s founder a hundred years ago, feels frozen in time, ‘80s memorabilia and a VR demo notwithstanding. It was once host to Canada’s one-percent, but earlier this month, it was mocked up as a superhero exhibit for nerds and vloggers.

When I walked through the front door, passing underneath the Xavier’s School plaque, I felt like a stranger for several reasons: Not only was it an opulent mansion, it was dressed up as a space that would, had it been real, not likely included me. I wondered if a normal human could ever be welcome in a safe — and elite — space for outcasts. It was a twist on the usual narrative of the X-Men as elitist outsiders.

No one can go to Hogwarts or Starfleet, not for real, so “attending” Xavier’s School felt like the closest I’ll come to ever entering the hallowed grounds of a fictional academy for special people.

It’s unclear where the X-Men get their organizational wealth — they’re marginalized mutants cast out from society, which means their job market is pretty thin — but Xavier’s school is certainly plush. The academy serves up three meals a day and offers private rooms, lush open grounds, and plenty of cutting-edge technology. It might suck to live as a mutant in the greater Marvel Universe, but going to Xavier’s School has to be awesome. And it would never welcome anyone like me or you.

The romanticism of Harry Potter, X-Men, and other plucked-from-reality-dropped-into-fantasies comes in part from the fact that we, the reader, imagine ourselves as one of the special ones; if mutants or wizards stalked the real world, each and every person reading the book (or watching the movie) is confident that they would be one of chosen few. But statistically speaking, there’s likely nothing special about us. In these alternate universes, we’d be Muggles and vote for Senator Kelly to keep mutants out and make America great again.

That’s why, for those of us who went to the mansion in Oshawa, attending the school was a special experience (once the existential panic went away). We shot arrows in the backyard and got close to screen-used props. While my coworkers worked in Brooklyn, I worked on my fifth cocktail in breezy Ontario beside the fountain Adam Sandler sang atop of in Billy Madison. I was amazed by the quick friendship struck up by passionate individuals invited to Parkwood. Over dinner, I learned we’ve all felt a little like outsiders growing up just for being really into this comic book stuff.

When Stan Lee and Jack Kirby created X-Men in 1963, it was an allegory for civil rights. More than fifty years since and we are seemingly re-legislating a lot of the landmark decisions that helped make America a little bit more equal. I fear that we’ve kept superheroes alive in our cultural fantasies in the childish hope that their seemingly egalitarian ethos would become reality, but as the trip showed, even superheroes are elitist.

X-Men: Apocalypse will be available on Blu-ray and DVD on October 4.