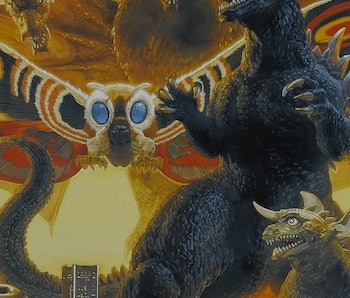 If you thought the two MUTO that ravaged Las Vega, Honolulu, and San Francisco in 2014’s Godzilla weren’t worthy opponents for the King of the Monsters, then we’ve got some good news. The upcoming sequel will have Godzilla face off against three of his most iconic foes from the classic Toho movies: Mothra, Rodan, and the baddest of them all, King Ghidorah.

We knew that the three kaiju would be making their way to Legendary’s Godzilla series — all three made cameos in the post-credits scene of Kong: Skull Island, the second entry in the franchise. But, the studio’s Monday press release confirms that all three are going to duke it out with Godzilla in the second Godzilla, which was at one point subtitled King of the Monsters. Here’s the official synopsis:

The new story follows the heroic efforts of the crypto-zoological agency Monarch as its members face off against a battery of god-sized monsters, including the mighty Godzilla, who collides with Mothra, Rodan, and his ultimate nemesis, the three-headed King Ghidorah. When these ancient super-species—thought to be mere myths—rise again, they all vie for supremacy, leaving humanity’s very existence hanging in the balance.

Monarch, the agency that explored Skull Island in the ‘70s and tried to keep the MUTOs under wraps in 2014’s Godzilla, will once again play a major role in the new film, and Ken Watanabe and Sally Hawkins will reprise their roles as Monarch scientists. Vera Farmiga, Kyle Chandler, and Bradley Whitford will also star in the upcoming film.

More like this
Entertainment
5.24.2022 7:00 PM
The Gray Man release date, time, cast, trailer, and plot for the Netflix action thriller
By Gabrielle Bondi
Culture
5.14.2022 11:30 AM
You need to watch the most subversive sci-fi sequel on HBO Max ASAP
By Alex Welch
Entertainment
5.25.2022 7:20 PM
Dune: Part Two release date, cast, and plot for the epic sci-fi sequel
By Gabrielle Bondi and Ryan Britt
Share: