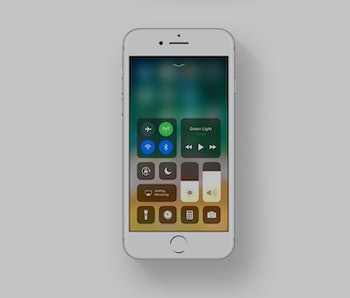 When you first swipe up from the bottom of the screen in iOS 11, you’re probably going to wonder what on Earth Apple was thinking. In the new software update for the iPhone and iPad, set to launch this fall, the Control Center has been totally redesigned. No longer a simple box of buttons, the redesign fills the screen and leaves you scratching your head. This is what Apple thinks people want?

The initial beta version, launched earlier this month, may end up looking very different to the finished product, but even in these beta versions it’s possible to get a rough idea of where Apple is headed. After using it for a few days, it becomes clear why Apple decided to ditch everything good about an easily-accessible settings panel and replace it with a bizarre splash of boxes and sliders.

Take a look at the two screenshots below. On the left is the Control Center as it appears in iOS 10, and on the right is the same panel from iOS 11.

The first thing you’ll notice is the new design takes up the whole screen. That means it’s harder to get back to whatever you were doing before, right? Not so. The area above the buttons in the new version acts as it does on the old design: tap it and the whole thing disappears. Unfortunately, that’s not crystal clear just from looking at it, so it’s going to feel rather overwhelming at first.

But some changes are definitely for the best. From its introduction with iOS 7 until iOS 9, the Control Center offered fast access to music controls. iOS 10, for some reason, moved them to a separate page, accessed by swiping left on the Control Center. This made changing songs slower but also left enough room to add in album art.

iOS 11 ditches that swiping system altogether and places everything on one page. Music controls are once again easy to access, and those that want to see things like album art and time elapsed simply need to hold down on the music control box, and it will pop out.

The same applies to other controls: try holding down and seeing what happens! This handy control pops out with the timer button.

The new panel also allows for a degree of customization. You can add extra buttons, like easy access to the “Voice Memos” or “Notes” apps, ideal for people who depend on those functions on a daily basis.

Unfortunately, the new Control Center probably won’t get a fair hearing based on first impressions, because it changes a lot and, admittedly, looks a bit … rubbish. You’ll force yourself to make do because you need to, though, and after a while you’ll wonder how you ever went without it.

Apple is expected to release iOS 11 in September, as it has with previous iterations of its iOS versions. Also expected in September is the iPhone 8, and the changes we’ve seen in iOS 11’s developer beta could make more sense with the new iPhone 8 hardware. Stay tuned.

More like this
Science
5.13.2022 2:00 PM
Scientists stared into the center of the Milky Way — here’s what they found
By Claire Cameron
Mind and Body
5.22.2022 6:00 PM
What to expect if you’re expecting to go off birth control
By Susan Walker and The Conversation
Culture
5.14.2022 2:00 AM
You'll wish you knew about these weird but extremely clever things sooner
By Dena Ogden
Related Tags
Share: