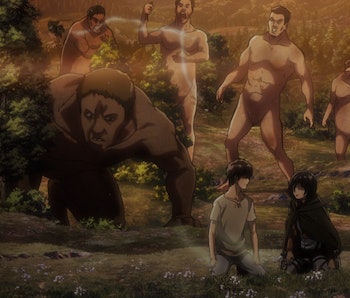 Though Season 2 of Attack on Titan was significantly shorter than Season 1, the finale — titled “Scream” — still had Twitter screaming in terror, delight, and confusion as the emotional roller coaster that ensued.

Spoilers follow for the Attack on Titan Season 2 finale, “Scream.”

Despite being a more introspective episode focused on the characters’ emotional journeys, “Scream” still had limbs and heads that were chomped off. The mission to recapture Eren from the hands of Reiner and Bertholdt proved successful. Among the many casualties was veteran soldier Hannes, who was devoured by the same Titan that killed Eren’s mother all those years ago. (Also pour one out for Erwin’s arm.)

In a pivotal moment, Eren discovered the power of the Coordinate, which allows him to control other Titans. Ymir also defected to Reiner and Bertholdt’s side, and a new Titan Shifter was teased in the final moments. With the surprise announcement at the conclusion of the episode that Season 3 is due out in 2018, fans took to Twitter to rejoice.

Here’s what Twitter had to say about the Season 2 finale:

Reactions were ranged from wildly enthusiastic to totally shocked.

Between Hannes dying, the tenderhearted moment between Eren and Mikasa, and Eren discovering a new power, “Wow” is the only word.

Some even called it “brilliant.”

“Scream” had some of the best Eren+Mikasa shipping fuel to date: “I’ll wrap that scarf around you as many times as you want. Now and forever — as much as you want!”

Now that Eren has discovered the power of the Coordinate, he can control all of the Titans? In video game lingo, Eren is about to get a bit OP and/or “broken” when Season 3 drops:

What will Eren’s new power mean for Season 3?

Some reviewers are saying that Season 2, despite being roughly half the length, eclipses Season 1 in almost every way from the action sequences, emotional moments, big revelations, to the straight-up animation.

A lot of that had to do with a truly great score for Season 2.

Viewers agreed that sure, the finale had some gruesome action (per usual), but it was also damn beautiful:

A lot of emotional moments made “Scream” a high point for Attack on Titan.

“Emotional roller coaster” really was the most accurate way to put it. The Mikasa-Eren and Ymir-Historia moments were gold, along with Hannes’s sacrifice.

Is enough love being given to the now-dead Hannes? RIP.

But of course, some manga purists out there are lamenting the content that inevitably had to be cut from the anime:

But perhaps most pressing is the urgent need for more Levi in the next season.

We truly feel for the people that somehow didn’t realize that Episode 12 was the finale.

Attack on Titan Season 3 will debut sometime in 2018.