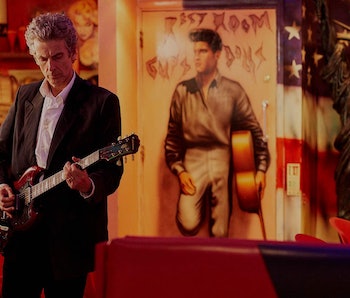 When Peter Capaldi’s reign at the titular Doctor on Doctor Who comes to an end in a few short weeks, fans of the show will remember the character for his love of rock ‘n’ roll and his penchant for brandishing an electric guitar as often as a sonic screwdriver.

In honor of BBC Music Day 2017 — which is a nationwide celebration of music in the UK — BBC offered up the definitive rock version of the Doctor Who theme via Twitter.

The alternate tune originally aired during the opening of the Season 9 episode “Before the Flood,” immediately after the Doctor’s opening monologue about the Bootstrap Paradox, which sort of confirms that he is, in fact, Beethoven.

In the monologue, he explains how a time traveler with pre-knowledge of Beethoven’s works could conceivably become Beethoven by going back in time and publishing the music himself. “Who really composed Beethoven’s Fifth?” he asks the viewer, before playing the chords to that very song on the electric guitar.

Then, it transitions directly into the badass, rocked-out version of the usual tune:

Of course, you can never forget the Doctor’s grand rock entrance while riding a tank in Essex of 1138. Rock on.