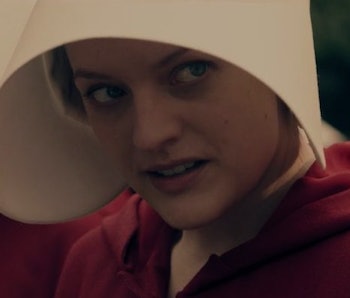 If you just finished the season finale of The Handmaid’s Tale, you’re probably tantalized by an ending that was, as showrunner Bruce Miller describes it, “frustrating.” Luckily, a second season is definitely coming next year; but because the finale left off where the eponymous book ends, the big question is: Will the novel’s author, Margaret Atwood, have any say in the plot that comes next?

Miller spoke to The Hollywood Reporter on this very topic and revealed that Atwood will indeed have substantial input — and already has — on the storyline. In fact, Miller says that he is working even “more closely” with Atwood on the second season since there’s no longer a book to guide him.

“We have had and continue to have extensive, deep and really fun discussions about what would happen in the future, what happens next,” he said of himself and Atwood. He explained that the “historical notes” section in the novel provides clues about the world of the story and what could occur next to the characters, but that these details alone weren’t enough from which to build a plot.

He elaborated further on his conversations with Atwood:

“We had lots of discussions about what would happen to the characters after season one in small and big ways. We’ve been talking about it ever since the middle of season one. There are things Margaret thought about a lot, because over the years that’s one of the biggest questions she’s been asked, is what happens next to these characters. So it wasn’t a question that I was bringing up to her for the first time.”

All of this is encouraging; heavy input from the author of the original source is the only way to do a show well, as Game of Thrones can demonstrate. The creative formulas that Atwood created in her novel work, and although the TV series shouldn’t be repetitive, it also shouldn’t fix what isn’t broken. The show’s been good at that so far, though it’s made some changes to the book narratives.

“The things that Margaret Atwood set up in season one are not going away,” Miller said. “The biggest lesson is just don’t be afraid to be as bold as Margaret was in the novel.”

Season 2 of The Handmaid’s Tale will premiere sometime in 2018.