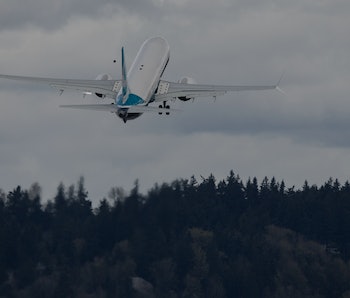 It seems that Boeing might have stolen next week’s Paris Air Show before it even gets off the ground.

The aerospace company announced announced last week that that it would start testing autonomous plane technology by 2018.

“The basic building blocks of the technology clearly are available,” said Boeing’s vice president of product development Mike Sinnett, during the June 8 announcement ahead of the air show.

Though there are many obstacles ahead, including trust, testing, and regulations, some experts believe the technology could ultimate prove to be safer than planes piloted by human.

While champions tout the innovations as having the potential to reduce traffic, fatalities, and maybe even the environmental cost of driving, the situation is far from perfect. Autonomous cars are in a legal limbo in many parts of the country and drivers struggle to let automation take the wheel — perhaps rightfully, given one Tesla test driver died in 2016 when his car couldn’t distinguish a white truck from the bright sky.

Where Boeing Will Likely Focus

As with autonomous cars, autonomous planes have the potential to make travel even safer. That doesn’t mean it’s guaranteed, but right now, human error is definitely a leading cause of transit catastrophe. The 2016 Tesla fatality was definitely the fault of the car’s autopilot system, but data shows that, on the whole, Teslas with autopilot are much save than regular models. Cars with the autopilot system deploy airbags once in every 1.3 million miles of driving, while those without deployed every 800,000 miles.