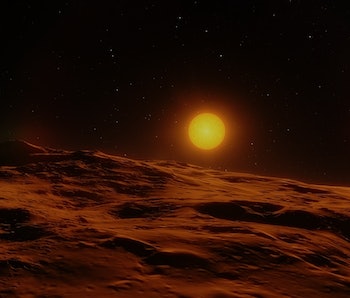 Back in May, when President Donald Trump signed a bill to authorize funding for NASA over the 2017 fiscal year, the takeaway was that the agency was basically being told by the federal government to go about business as usual. Barring a few exceptions, Congress, with Trump’s blessing basically gave NASA exactly what it asked for, to do as it would for one more year. But there was one, small, really tiny edit into the final version of the bill which basically told NASA to, well, find aliens.

Here’s the deal: the 2017 NASA Authorization Act has a line that, as The Atlantic observes, basically calls for “the search for life’s origins, evolution, distribution, and future in the universe.”

So while Congress didn’t actually tell NASA it should spend the next year looking for extraterrestrial life, it is perhaps the first explicit mention on behalf of the government that part of the agency’s purpose is to learn what we can about life outside of this planet.

The authorization act reads, under the headline ASTROBIOLOGY STRATEGY:

“The Administrator shall enter into an arrangement with the National Academies to develop a science strategy for astrobiology that would outline key scientific questions, identify the most promising research in the field, and indicate the extent to which the mission priorities in existing decadal surveys address the search for life’s origin, evolution, distribution, and future in the universe.”

The Act calls for NASA to enlist the help of partners from both the international community and the private sector as well.

This is small, but critical. NASA’s work in astrobiology and its investigation into extraterrestrial life stretch back for decades, but Congress has hardly ever acknowledged that work, let alone sent instructions to NASA to look pursue such endeavors.

But times have changed. The search for extraterrestrial intelligence (SETI) has fortified its position these days as a serious scientific endeavor. The incredible discoveries astronomers have made when it comes to understanding the potential for habitability on other worlds like Mars or Europa, or the gains made in pinpointing potentially habitable exoplanets just around the corner, have made the prospect of finding aliens more and more encouraging.

In short, the odds of finding aliens have never been better. Congress has less of a reason to make the investigation of life outside of Earth a goal couched in scientific jargon. The government is now on record with officially endorsing an active investigation of aliens spearheaded by the world’s biggest space agency.

More like this
Science
Sep. 24, 2022
Super-Earths may be the best places to look for alien life
By Chris Impey and The Conversation
Science
Sep. 18, 2022
The Solar System could be littered with alien artifacts — even on Earth
By Seth Lockman and Universe Today
Science
Sep. 25, 2022
Mars’ ancient lakes could help discover life on the Red Planet
By Matt Williams and Universe Today
Related Tags
Share: