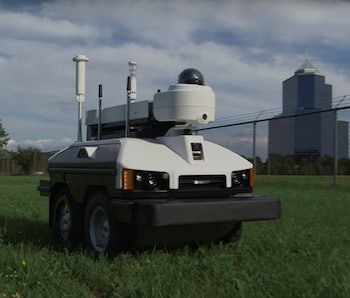 Attention, teens: if you try and sneak onto a pot farm you may face a fleet of unmanned security vehicles chasing you down.

In May, the Southern California pot farm Canndescent deployed an unmanned vehicle to patrol and guard its supply of jazz cabbage, which it sends out to medical dispensaries. The INTELLOS Automated Unmanned Ground Vehicle, made by the tech manufacturer Sharp, will provide perimeter security and routine patrols to keep intruders out and keep people out of harm’s way.

As of Monday, at least four other pot farmers have also leased security robots from Sharp.

Aside from avoiding injuries to human security guards, the smart INTELLOS drone could also prove to be more vigilant than someone stuck guarding the farm during the night shift.

“At night guards sleep, they play video games, and spend time on social media. It’s fraught with human error,” Todd Kleperis, CEO of Hardcar Security told Forbes in a May interview. He also pointed out that he’d rather have a burglar shoot a drone, even one as expensive as the $300,000 INTELLOS, than a human employee.

The drone has high-quality cameras that can record and provide a constant stream of security footage, as well as all-terrain capabilities. In the event of a security breach, the robot can contact the owners of the farm and provide two-way communication. In the meantime, it can chase down perceived intruders while blaring its sirens. In the future, the INTELLOS may be equipped with pepper spray.

While battery limitations and the chance for errors mean that human security guards aren’t about to be removed from the picture, drones like the INTELLOS could prove to be a valuable supplement to help keep an eye on things.