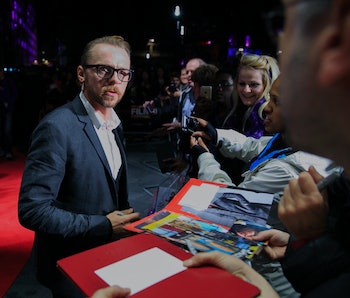 Simon Pegg thinks superhero and "geek" movies are making us a little childish. An interview with the veteran genre actor for the Radio Times reveals he's concerned for society's infantilizing by the current boom of geek stuff. More than that, he's considered "retirement" from geek culture, as if that's an actual thing to retire from.

In the interview, Pegg laments the paradigm shift of modern box-office hits. Where once we had The Godfather, we now have Avengers: Age of Ultron and he "doesn't know if that's a good thing."

Before Star Wars, the films that were box-office hits were The Godfather, Taxi Driver, Bonnie And Clyde and The French Connection – gritty, amoral art movies. Then suddenly the onus switched over to spectacle and everything changed … I don’t know if that is a good thing.

… Obviously I’m very much a self-confessed fan of science fiction and genre cinema but part of me looks at society as it is now and just thinks we’ve been infantilised by our own taste. Now we’re essentially all consuming very childish things – comic books, superheroes. Adults are watching this stuff, and taking it seriously.

Pegg's argument has a ton of holes. Although yesteryear's biggest films had rich, gritty storytelling, they too were spectacle pieces intended for commercial success. Gone With the Wind has more in common with The Avengers than one would think.

It is a kind of dumbing down, in a way, because it’s taking our focus away from real-world issues. Films used to be about challenging, emotional journeys or moral questions that might make you walk away and re-evaluate how you felt about … whatever.

So like, did Simon Pegg sleep through The Dark Knight, a blockbuster Batman movie with sharp commentary on post-9/11 surveillance and urban terrorism? Or Watchmen, Captain America: The Winter Soldier, or even X-Men and its civil rights parable?

Pegg is in the middle of writing the next Star Trek movie due out next year. Does he not remember Star Trek's importance as a blazing paragon of progressive storytelling?

Sometimes (I) feel like I miss grown-up things. And I honestly thought the other day that I’m gonna retire from geekdom.

I’ve become the poster child for that generation, and it’s not necessarily something I particularly want to be. I’d quite like to go off and do some serious acting.

It's easy to begrudge Pegg for coming off as ungrateful, especially to those who raised him on a pedestal throughout his career. He represented "that generation" with his roles in Spaced, Shaun of the Dead, and The World's End as slackers arrested in development. That's his audience.

There's credence to being left unfulfilled by your own work as an artist. He wants to aspire to more, and that's okay. He has already taken on roles that have departed from his usual fare, like his cold-blooded assassin in Kill Me Three Times.

But it's difficult to be sympathetic when he actively participated, such as penning an autobiography titled Nerd Do Well where he talks about watching Star Wars a bunch. What gives?

Pegg's argument is broken and he's sounding like a cranky, aging uncle at Thanksgiving. It's bad timing too, since Mad Max: Fury Road just destroyed every notion of what a blockbuster is supposed to be. It's shortsighted, because Pegg dwells too much on the box-office as an indicator of cultural tastes. Yes, people go to the theaters for superheroes, but they'll also watch Nightcrawler at home on demand.

Perhaps you really do live long enough to see yourself become a villain.

More like this
Science
11 hours ago
ESA's New Juice Mission Might Finally Uncover Jupiter's Hidden Secrets
By Doris Elín Urrutia
Science
2 hours ago
Look! Eerie Green Comet Poses With Big Dipper and Little Dipper
By Kiona Smith
Science
Feb. 6, 2023
How the Webb Telescope is Rewriting What We Know About the Early Universe, One Galaxy at a Time
By Doris Elín Urrutia
LEARN SOMETHING NEW EVERY DAY.
Share: