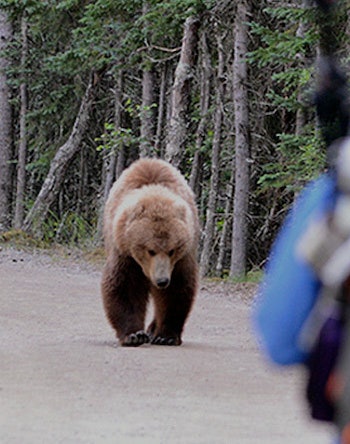 Four camera-wielding visitors crept toward a portly brown bear as it munched salmon along the Brooks River in the Katmai National Park, Alaska. They were within a football field of the animal when it stopped eating and began to yawn.

What the group seemed to not realize is that a yawn doesn’t mean a bear is tired; rather, a yawn indicated the bear was agitated. Suddenly, the bear took two powerful strides towards the group, leapt nearly 20 yards, then halted, huffed, and beat its paws into the sand. It was a bluff, and it worked. The party of four backpedaled into the woods, wanting nothing more to do with the salmon-fattened animal.

Humans often behave unwisely around large creatures, and nowhere is this more apparent than in our national parks. At Yellowstone National Park, undaunted humans regularly approach horned, 1,400-pound bison for a picture. The problem, of course, isn’t confined to national park boundaries. Recently, a family in Vancouver Island, Canada disregarded signs prohibiting the feeding of sea lions (who are wild carnivores). A [sea lion snatched a girl’s dress in its teeth, violently yanking her into the water]((https://www.nytimes.com/2017/05/22/world/canada/canada-sea-lion-grabs-girl.html?_r=0).

It’s easy to label such behavior as idiotic (which it sometimes surely is), but the persistence of these events suggest our misguided actions have deeper, social and evolutionary roots.

Barrett’s research spans regions as wildly different as the Ecuadorian Amazon and inner-city Los Angeles, allowing him to observe how children in the jungle and the city view danger. Barrett’s initial experiments in this area are simple: Using flashcards, Barrett taught both groups of children which animals posed a threat, and he found that regardless of whether they are in Los Angeles or the Amazon, kids are evolutionarily prepped to learn about animal danger at this young age. “Kids in both the city and the country learn very quickly — ages three, four, and five — which animals are safe or dangerous,” explains Barrett. “You only have to tell them once.”

But if these danger cues are missed at an early age, one might never grasp the true risk posed by larger mammals. “If you don’t have the right learning experience you don’t end up being afraid of these things,” says Barrett. “This might explain why people aren’t afraid of lions or bears — they probably think they’re cute — probably because they missed appropriate learning experiences in childhood.”

In traditional human societies, before people began living domesticated urban lives, picking up these cues was almost certainly inevitable, simply because wildlife was a part of the daily human experience. When people scavenged and hunted, they were necessarily a part of the wild, exposed to the dangers posed by large creatures, no matter how superficially endearing an animal might be.

But today, many Western kids get their early wildlife cues from Disney, which gives ambiguous information about animals. The Lion King certainly has its fun fictional merits, but a movie where a kind lion befriends a meekrat and warthog does a poor job of giving little kids the necessary cues about danger. “It’s ecologically totally false information,” explains Barrett.

Years later, when the child becomes an adult, foolishness can prevail.

“It’s almost as if people leave their brain in their car when they go into the wilderness,” Dan Blumstein, a behavioral ecologist at the University of Los Angeles, California, tells Inverse.

Humans are particularly drawn to animals with rounded features — even if they’re massive.

The power of perceived cuteness overwhelms our sensibilities for risk, perhaps because our ability to understand danger cues are, as a Barrett suggested, ill-formed.

The decision to approach a huge adult mammal can be further encouraged by other psychological errors, like the false security provided by clear open spaces, giving us a good view of the animal. In denser brush, we might be less inclined to visit wildlife.

“Our perception of risk is greater when we don’t have clean sight-lines,” says Blumstein. “We might be more afraid of encounters with animals where we don’t see them from a distance.”

Our motivations to approach wild animals may also be cultural, harkening back to our ancestors, when we too were a part of the wild. “We feel a sort of kinship with wildlife — that’s why we invite pets into our homes,” says Mike Fitz, an active naturalist and park ranger (Fitz emphasized that his thoughts are his own, and that they do not represent the National Park Service).

In many protected environments like Yellowstone and Katmai National Parks, animals like bears and bison don’t have to worry about being shot. That means they get used to people being around and might not provide signals that they’re wild and dangerous. “When animals aren’t conditioned to react to people, it encourages people to approach,” says Fitz. “Twenty-five yards away from a bison is pretty darn close for an animal that can run as fast as a bear. People don’t know what an animal’s cues really say about their comfort level to your approach.”

Learning the nuanced behavioral cues of animals takes a lot of experience. For brown bears, yawning might seem harmless — but rangers like Fitz know this means that an animal is distressed, often because there are people crowding it. If someone doesn’t know when an elk, bison, or elephant seal is irked by a human’s presence, they might take a fateful step too close. “The desire to connect with an animal in some way can push people an extra inch or two, which can make the difference between a safe and unsafe encounter,” says Fitz.

Whether the compulsion to step closer is grounded in evolutionary miscues or an innate desire to connect to the wilds, the modern solution is the same, and it’s simple: Give animals space.

“If we truly respect nature we interact with nature on its own terms, not our terms,” says Blumstein.